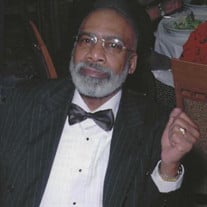 William “Bill” C. Martin, Jr., 74, of Laurel, formerly of New Jersey, passed away peacefully on Thursday, February 10, 2022, at his home in Laurel. He was born February 11, 1947, in Glen Ridge, New Jersey, a son of the late William C. Martin, Sr. and Mabel (Summers) Martin. Bill earned his degree in accounting from St. Paul’s Episcopal College in Virginia. Following college he served his country in the U.S. Army during the Vietnam War. He enjoyed a long, rewarding career as an accountant for Public Service Electric and Gas in Newark, New Jersey. It was there that he met and fell in love with his co-worker, Cheryl Trotter in 1981. They were married and together they cherished over 36 years of marriage. Bill was a lifelong lover of John Coltrane jazz music and listened to his music up until the end. He was a lifelong member of the Episcopal faith and an active member of St. Philip’s Episcopal Church in Laurel where he served as a lay speaker amongst other duties. He was also a member of Laurel Planning and Zoning. Bill enjoyed the outdoors, camping, fishing, and working in his immaculate yard. When it was too cold to be outdoors, he enjoyed crossword puzzles and Sudoku. Bill’s family and friends will all remember his excellent cooking, especially his homemade biscuits and dressing. He is survived by his beloved wife, Cheryl Y. (Trotter) Martin; daughter, Diane L. Booker and her husband, Vincent of Monmouth Junction, New Jersey; grandchildren, Vincent E. Booker, Richard A. Booker and Joy S. C. Booker; and sisters, Miriam Martin and Tanya Burwell. He is also survived by several cousins, nieces and nephews. A memorial service will be held on Saturday, March 26, 2022 at 11:00 a.m. at St. Philip's Episcopal Church in Laurel. Everyone is welcome to join the family for a fellowship meal afterwards at the church. In lieu of flowers, memorial contributions may be made in his memory to St. Philip’s Youth Group, 600 S. Central Avenue, Laurel, DE 19956. Arrangements are in the care of Short Funeral Home in Delmar. Online condolences may be sent to the family by visiting www.shortfh.com.

The family of William C. Martin Jr. created this Life Tributes page to make it easy to share your memories.

Send flowers to the Martin family.