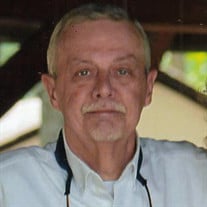 William R. Littleton, Jr., “Billy”, 63, of Pittsville, passed away Thursday, July 18, 2019 at Peninsula Regional Medical Center in Salisbury. He was born July 2, 1956 in Salisbury, a son of the late William R. Littleton, Sr. and Constance Ann (Dennis) Littleton. Billy graduated from Wicomico High School with the class of 1974. Soon after graduation he went to work to help support his family. His father had passed away at a young age and Billy unselfishly stepped up to help his mom and quickly became the father figure his younger sister and brothers needed. His career in the hotel and hospitality industry began at the Sheraton in Salisbury, where he started as a cook. This led to a career of over 30 years with Clarion Hotels and most of those years were spent as a purchasing director in Ocean City. Billy loved his cats, working in his yard and flowers and was a fantastic cook. He also enjoyed helping others, and was always there for his family and friends. He is survived by a sister, Michelle Littleton Foster and husband Ken of Pocomoke; a brother, Michael R. Littleton and companion Debbie Kuhn of Salisbury; nieces and nephews, Jennifer Vickers and husband Chuck, and their children, Brianna, John, Bella and Summer; J.W. Littleton; Ashley Milne and her son Josiah; Chris Littleton; and Sarah Littleton; and his best friend of over 30 years, Ilene Shelton of Selbyville. He is also survived by several aunts, uncles and a host of friends. In addition to his parents, he was preceded in death by a brother, Jack Littleton. A visitation for family and friends will be held on Tuesday, July 23, 2019 from 6:00 p.m. to 8:00 p.m. at Short Funeral Home in Delmar. Interment for family and friends will be held on Thursday, July 25, 2019 at 10:00 a.m. in Pittsville Cemetery. Memorial contributions may be made in Billy’s memory to the American Diabetes Association, P. O. Box 11454, Alexandria, VA 22312. Arrangements are in the care of Short Funeral Home in Delmar. Online condolences may be sent to the family by visiting www.shortfh.com.

The family of William R. Littleton Jr. created this Life Tributes page to make it easy to share your memories.