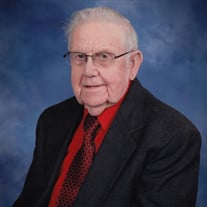 William J. Layfield, 89, of Delmar, passed away on Tuesday, September 4, 2018 at Coastal Hospice at the Lake in Salisbury. He was born on April 10, 1929 in Delmar, Delaware, a son of the late William R. and Lillie Agnes Layfield. William married Virginia Lee Donovan on her 19th birthday, December 10, 1948. Together they had four daughters. William was a hard worker throughout his life as a grain and poultry farmer. He held various jobs as a delivery man and retired from Sears, Roebuck & Co. Upon retirement from Sears, Roebuck, he delivered "The Guide." He was a member of First Baptist Church of Delmar for nearly 70 years holding several positions as deacon, Sunday School teacher, Sunday School secretary, Sunday School superintendent, and trustee. After retirement, he and Virginia enjoyed camping and bus trips. In recent years, he enjoyed volunteering at Harvest Ministries in Delmar assisting in the food distribution area. His favorite day of the year was April Fool's Day playing tricks on family and friends. He is survived by his daughters, Debbie Finn of Salisbury, Gwen Bowden (Dennis) of Virginia, Joan Bowden (Gary) of Georgia, and Karen Sallac of Salisbury; grandchildren, Emily Dozier, Lindsay Daniels (Grant), Ryan Bowden, and Jared Bowden; a great grandson, Zachary Dozier; a sister, Agnes Truitt of Seaford; a brother, Clark Layfield (Karen) of Delmar; several nieces and nephews; and his special cat, “Dumplin.” In addition to his parents, he was preceded in death by his wife, Virginia Lee Layfield, a son-in-law, Harry Sallac; a great grandson, Blake Dozier; and two sisters, Pauline Winters and Ruth Ann Hoover. A funeral service will be held on Saturday, September 8, 2018 at 11:00 a.m. at Short Funeral Home, 13 E. Grove Street in Delmar. A visitation for family and friends will be held from 10:00 to 11:00 am. The Reverend Kerry Hinton will officiate. Interment will follow in St. Stephens Cemetery in Delmar. In lieu of flowers, contributions may by sent to Harvest Ministries, Inc., 305 N. Bi-State Blvd., Delmar, DE 19940. Arrangements are in the care of Short Funeral Home in Delmar. Online condolences may be sent to the family by visiting www.shortfh.com.

William J. Layfield, 89, of Delmar, passed away on Tuesday, September 4, 2018 at Coastal Hospice at the Lake in Salisbury. He was born on April 10, 1929 in Delmar, Delaware, a son of the late William R. and Lillie Agnes Layfield. William married... View Obituary & Service Information

The family of William J. Layfield created this Life Tributes page to make it easy to share your memories.

William J. Layfield, 89, of Delmar, passed away on Tuesday, September...

Send flowers to the Layfield family.