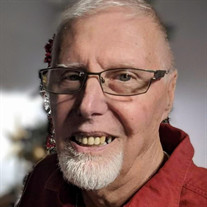 William Whiteley Farrow, Sr. passed peacefully on Friday August 27, 2021 at TidalHealth Nanticoke Hospital in Seaford, with family at his side. Born January 13, 1944 in Wilmington DE to the late Benjamin Cole Farrow and Lillian Whiteley Farrow. Bill graduated from John Dickinson Highschool with the class of 1962. It was there that he met the love of his life, Sharon. They were married October 10, 1964. Bill was a sheet metal fabricator and carpenter by trade. During the 70s, he took sailing lessons to learn how to sail the boat that he built so that he could enjoy quality time with his family. In the 80s, he started his own company that he named Country Heirlooms. He built and refinished many beautiful pieces of furniture for clients including a lovely cross for a local church. In the 90s he got his motorcycle license and enjoyed traveling the open roads together with his wife. Bill enjoyed guns, classic cars, a passion for duck decoys but most of all loved being near the water. Bill loved the Lord and became an ordained minister later in life. God and his family were his priorities. Bill is survived by his beloved wife, Sharon Rose Hnatiuk Farrow; daughter, Shari Lynn Norem and her husband Terry of Elkton MD; son, William Whiteley Farrow, Jr and his companion Mary Quinlan of Gonic NH; son, Mark Collier Farrow and wife Romaine of Seaford DE; sister, Beth Tremonte and her husband Sal; sister, Lynn Hughes; Grandchildren, Justin Lee Farrow, Amanda Cheng, Crystal Mixon, Tyler Farrow, Katelyn Farrow, Mark Farrow, Dana Farrow and Megan Farrow; 15 great grandchildren and several nieces and nephews. Services will be private. Interment at Odd Fellows Cemetery of Seaford will be held at a later date. Memorial contributions can be made to Cancer Treatment Centers of America or Turning Point. Arrangements are in the care of Short Funeral Home in Delmar. Online condolences may be sent to the family by visiting www.shortfh.com.

The family of William Whiteley Farrow Sr. created this Life Tributes page to make it easy to share your memories.

Send flowers to the Farrow family.