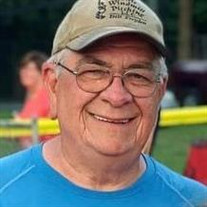 William “Billy Joe” J. Dryden, 72, of Delmar, Delaware passed away on Sunday, November 15, 2020 at his home. He is now cancer-free and celebrating with Jesus. Bill was born on September 21, 1948, in Salisbury, Maryland, he was the only child born to the late Willis and Beulah Dryden. Bill attended Delmar schools and graduated with the class of 1966. As a teen, he was head of the youth choir of St. Stephens United Methodist Church in Delmar. Bill was a gifted musician and singer and at the young age of 14 performed on both radio and TV with the group for which he was the lead guitarist and vocalist, Billy Joe and the Royals. Their first single, “Your Sweet Love” reached and stayed in the Top 10 for weeks. Bill continued his music career later as the lead vocalist and bass player for his new group, The Shoreman, which produced a full album. When he rededicated his life to the Lord, he also rededicated his musical talents by serving on the worship team for Delmar Christian Center, along with guest appearances at local churches, including Sonspot Ministries in Ocean City, Maryland. Bill, an avid outdoors sportsman, was also owner/operator of Dryden Taxidermy, which he renamed Genesis Taxidermy to emphasize his spiritual rededication as well. Bill was employed by the State of Delaware Department of Transportation for twenty-five years and retired from his position as operations manager, which allowed him more time to focus on his entrepreneurial interests which later meshed with his love of softball to form Girl’s Windmill Pitching with Bill Dryden. He loved coaching his students to be their best and worked tirelessly to help them succeed. Most importantly, he loved the relationships he built with each student and their families. It must be mentioned that Bill was well-known for his love of cooking and posting his creations on Facebook. He loved his family and cherished family gatherings. He is survived by beloved wife of 42 years, Cheryl. He is also survived by his children, Kimberly Henry and her husband Bob of Laurel, William Dryden (II) “B.J.” Dryden and his fiance’ Melissa of Seaford, Heather Dryden of Delmar, Ashley Dryden of Delmar; grandchildren Lauren Smith (Billy), Kaitlyn Johnson (Corey), Trey Henry, Drew Dryden, Brad Dryden, Olivia Dryden, Morgan Wright, Lily Wright, Kortnie Wright, Marlee “Moo” Somers, Makenzee “Duct Tape” Somers; great-grandchildren Aria Smith, Liam Smith, Layla Smith, Malachi Smith, Josiah Smith; and numerous nieces and nephews. He was preceded in death by his parents Willis Dryden and Beulah (Trader) Dryden. A Celebration of Life will be held on Saturday, November 21, 2020 on the softball field at Mason Dixon Sports Complex in Delmar, Maryland at 11:00 am. Please wear a facemask and be prepared to follow social distancing guidelines. We encourage you to bring a chair and pitching students are welcome to wear their softball jerseys. Anyone who wishes to send flowers for Bill’s service can send them to a family member and we will bring them to the field.

The family of William J. Dryden created this Life Tributes page to make it easy to share your memories.

Send flowers to the Dryden family.