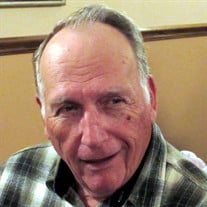 HEBRON- William P. “Bill” Chew, 75, died peacefully on Monday, December 31, 2018 at the Burnett Calvert Hospice House in Prince Frederick, Maryland. He was born July 6, 1943 in Elizabethtown, Kentucky, a son of Wellington “Pete” Chew and the late Betty Lee Chew. Bill graduated from Wicomico High School with the class of 1961. In 1965 he graduated from the Maryland State Police Academy, serving a 25 year career as a state trooper before his retirement in 1990. After retirement he stayed active as the owner of Rockawalkin Enterprises, providing custom harvesting services for local farmers; driving for Magnolia trucking; and helping family and friends in any way he could. He loved the outdoors and enjoyed farming, hunting, fishing, crabbing and camping. Since 1973, Bill had been a member of the North-South Skirmish Association, which allowed him to combine his enthusiasm for camping, competitive shooting, and civil war history. For several years he volunteered at the Rough and Tumble Steam Show in Lancaster, PA. He will be remembered as a loving father, grandfather, brother and friend to many, with a strong work ethic and selfless service to others. In addition to his father, he is survived by a son, Ronald Chew and his wife Debbie of Owings, MD; granddaughters Abby and Amanda; a brother, Bryan Chew and his wife Coleen, and their son Brandon; and a sister, Sharon Murphy and her husband Bill of Quantico, and their children, Janet Acosta and William H. Murphy, III; and a brother-in-law, Donald J. Derickson and his wife Lynn and their children, Heather and Andrea. In addition to his mother, he was preceded in death by his wife, Kay Derickson Chew. A visitation for family and friends will be held on Saturday, January 5, 2019 from 10:00 a.m. to 12:00 p.m. at Short Funeral Home in Delmar, followed by a funeral service which will begin at 12:00. Interment will follow at Springhill Memory Gardens in Hebron. Memorial contributions may be made in Bill’s memory to the CJD Foundation by visiting https://cjdfoundation.org/donate or to Burnett Calvert Hospice House, P.O. Box 838, Prince Frederick, MD 20678. Arrangements are in the care of Short Funeral Home in Delmar. Online condolences may be sent to the family by visiting www.shortfh.com.

The family of William P. Chew created this Life Tributes page to make it easy to share your memories.

Send flowers to the Chew family.