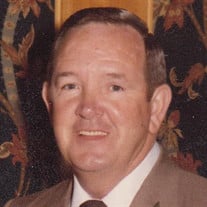 William L. Calloway, 86, formerly of Delmar, Delaware passed away on Friday, August 25, 2017 at Snow Hill Nursing Home. He was born in Laurel on October 17, 1930, a son of the late Carlton and Helen Calloway. Bill was a graduate of Laurel High School and employed by Royster Fertilizer Company and Lebanon Chemical Corporation as a field representative. He was a member of St. Stephen’s United Methodist Church in Delmar. His past activities included president of the Delmar Kiwanis Club, president of the Delmar High School Board of Education, and member of the Delaware National Guard obtaining the rank of master sergeant. His hobbies included rooting for the Baltimore Orioles and Ravens, and supporting the Delmar Varsity Football team. He was a part of the chain crew at Delmar High School for 41 years. He is survived by his son and daughter-in-law, Steven and Gina Calloway; and a grandson and his wife, John and Emily Calloway. Bill also leaves several nieces and nephews. In addition to his parents, he was preceded in death by his wife of 46 years, Thelma E. Calloway in 1998; four brothers, James C., Robert L., Charles F., and Kenneth E., and three sisters, Doris Fry, Thelma Hutcheson, and Betty Grazela. The family would like to express their sincere gratitude to the nurses, physical therapists, and all the staff at the Snow Hill Nursing Home. They were special in their dedication to Bill and his family. A funeral service will be held at Short Funeral Home on East Grove Street in Delmar on Tuesday, August 29, 2017 at 2:00 p.m. A visitation for family and friends will be held one hour prior to the service. Interment will follow the service in St. Stephen’s Cemetery in Delmar. In lieu of flowers, memorial donations may be made to the Lower Shore Parkinson’s Group, 909 Progress Circle, Salisbury, MD 21804. Arrangements are in the care of Short Funeral Home in Delmar. Online condolences may be sent to www.shortfh.com.

William L. Calloway, 86, formerly of Delmar, Delaware passed away on Friday, August 25, 2017 at Snow Hill Nursing Home. He was born in Laurel on October 17, 1930, a son of the late Carlton and Helen Calloway. Bill was a graduate of Laurel High... View Obituary & Service Information

The family of William L. Calloway created this Life Tributes page to make it easy to share your memories.

Send flowers to the Calloway family.