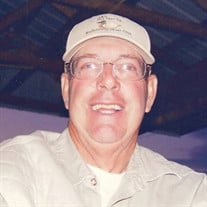 Georgetown- William Thomas Owens, 80, of Georgetown, died Saturday, December 2, 2017 at Delaware Hospice Center in Milford. He was born April 27, 1937 in Delmar, a son of the late Russell and Helen (Robinson) Owens. Bill grew up on the family farm and for most of his life considered farming his greatest love. One of his fondest memories of his youth was at the age of 14 showing a pony on stage at the Delaware State Fair. In his later years he also drove trucks and worked as a heavy equipment operator. He attended Joshua House Ministries in Gumboro for many years before recently joining the Delmar Church of God of Prophecy. Bill was an avid outdoorsman who enjoyed hunting, horseback riding and camping. He was an accomplished skeetshooter and a two-time Delaware state champion. Memberships included the Salisbury Gun Club, the RV Shanty-Shakers Club and he was one of the original founders of the Laurel Saddle Club. He loved teaching children to shoot and gun safety. Bill will be remembered as a loving husband, father, grandfather, brother and friend to many. He is survived by his wife of 21 years, Janice P. Foskey Owens, to whom he married on July 27, 1996; sons, John Wesley Owens and wife, Patricia of Laurel and James Lewis Owens and wife, Bridget of Delmar; step-children, Cindy Adkins and husband, Ace and Jeffrey Foskey and wife, Tina; grandchildren, Janice Hoffman (Willie), Kim Russell (Greg), Billy Owens (Lindsey), Krystle Owens, Jonathan Balas and Lauren Balas; great grandchildren, Natalie, Will, Jr., Allie, Emily, Maddie, Blake, Cameron and Logan; and a sister, Shirley Ann McDaniel of Delmar. He is also survived by his mother-in-law, Virginia Pepper; brother-in-law, Steven Pepper; sisters-in-law, Martha Callaway and Donna Rogers; and several nieces and nephews. In addition to his parents, he was preceded in death by his first wife, Mary Louise Thompson Owens, who passed in 1994; and a son, William “Billy” Thomas Owens, Jr., who passed in 1982. A funeral service will be held on Wednesday, December 6, 2017 at 1:00 p.m. at Short Funeral Home in Delmar, where family and friends may call from 12:00 p.m. to 1:00 p.m. The Reverends Michael Phillips and Chuck Reynolds will officiate. Interment will follow the services at Springhill Memory Gardens in Hebron. Memorial contributions may be made in his memory to the church of your choice or Delaware Hospice, 100 Patriots Way, Milford, DE 19963. Arrangements are in the care of Short Funeral Home in Delmar. Online condolences may be sent to the family by visiting www.shortfh.com.

Georgetown- William Thomas Owens, 80, of Georgetown, died Saturday, December 2, 2017 at Delaware Hospice Center in Milford. He was born April 27, 1937 in Delmar, a son of the late Russell and Helen (Robinson) Owens. Bill grew up on the family... View Obituary & Service Information

The family of William "Bill" T. Owens created this Life Tributes page to make it easy to share your memories.

Send flowers to the Owens family.