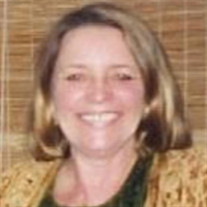 Wendy Laing Thompson, 79, of Whitehaven died Wednesday, April 22, 2020 of injuries sustained in a motor vehicle crash. Born in Oxford, England, she was the only daughter of the late Mary Grace Laing and Donald Laing of Swindon, Wiltshire, England. Her father died during World War II when Thompson was very young. She trained as a bacteriologist before moving to Chelsea, London, where she lived during the 1960s and early 1970s. During her time in London, she worked as a photographer’s assistant and in marketing before she moved to the United States in the mid-1970s. She modeled and appeared on the cover of a James Bond book. Upon arriving to the United States, her daughter, Rayne Thompson, was born in Los Angeles, California. They settled in Point Richmond, CA, a town she cherished where she played many roles at The Masquers Playhouse. After several years, she returned to England with her daughter. In 1988 they both came back to the United States, this time to Wicomico County, where she lived in Salisbury before settling in Whitehaven in the 1990s. She worked for a time in the public relations office of Salisbury University, was one of the first announcers at Delmarva’s public radio station, WSCL and later had a weekly talk program called “In Touch” at WESM in Princess Anne. Her musical interests included a variety of styles and performers, including Big Maybelle, Maria Callas, Bob Marley and Meatloaf. She became a master at whatever piqued her curiosity including cooking, art, gardening, history and more. She was a veracious reader and before Google she always had many volumes of encyclopedia Britannica line her bookshelf, along with a large book on the origin of words that she read before going to sleep each night. She contributed to Metropolitan Magazine, writing profiles of businesses and the magazine’s Home of the Month series. She would greet everyone with “Yoo-hoo” in her British accent, and loved entertaining friends over wine, great food and laughter. She could whip up a vichyssoise, a perfect hollandaise sauce, salmon mousse or a batch of mango chutney, all without consulting a recipe. Recently she traveled with friends by cargo ship on a tour of the South Pacific’s remote Marquesas Islands. Thompson was a member of the Salisbury Meeting of the Society of Friends and attended meetings regularly. She loved the small town of Whitehaven and was very active in the Whitehaven Heritage Association. She leaves many friends and is survived by her daughter, Rayne Thompson; two grandsons, Finn and Reed, of California; and her goddaughter, Kate Jangra, of London, England. The Whitehaven’s church bells rang in her honor over the weekend. A memorial service will be held in Whitehaven, MD at a later date, when restrictions on gatherings are lifted. Arrangements are in the care of Short Funeral Home in Delmar. Online condolences may be sent to the family by visiting www.shortfh.com.

Wendy Laing Thompson, 79, of Whitehaven died Wednesday, April 22, 2020 of injuries sustained in a motor vehicle crash. Born in Oxford, England, she was the only daughter of the late Mary Grace Laing and Donald Laing of Swindon, Wiltshire,... View Obituary & Service Information

The family of Wendy Laing Thompson created this Life Tributes page to make it easy to share your memories.

Send flowers to the Thompson family.