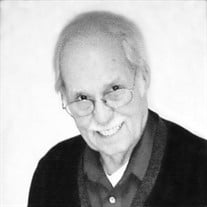 Wendell Holmes Hubbard Jr., 93, returned to his heavenly home on May13th, 2021 after a brief illness. His devotion to his family and his firm belief in God supported him through this time and gave him peace. Wendell was born to the late Wendell Holmes Hubbard Sr. and Hazel Elizabeth Hubbard in Baltimore MD. He lived his early years in Golden Hill MD during the depression. When his family moved back to Baltimore, he spent his summers helping his grandfather on the farm in Island Creek. In 1946 he married Betty and moved to the Eastern Shore in 1947. Most of his working years were spent in home improvement. Later In life he entered the real estate field writing appraisals. He served on the FHA/VA Appraisal Panel and was the owner of Wendell Hubbard Appraisals until his retirement. Wendell served in WWII in the US Navy, commissioned to the USS Massachusetts. He was a Life Member of VFW Post 194. He was a member of Kiwanis and served as a past president. His love for singing was his passion, taking any opportunity that came his way. He was a member of The Peninsulaires and offered songs of praise in his church. Wendell and Betty loved Skyline Drive. As his family grew, they spent every Labor Day weekend camping on Lewis Mountain, an annual tradition that has been carried on by his children, and grandchildren. They were also members of Seagulls Camping Club. Wendell and Betty enjoyed being members of the Breakfast Club, a group of good friends that met in each other’s homes sharing many good times. Wendell never met a stranger and made many friends throughout his lifetime. After the passing of Betty, he married Carolyn Lewis, spending much of their time in Florida. Wendell is survived by his wife, Carolyn and her family; his daughters Colleen Caldabaugh, Carole Marine (Gary), Wendy Rohrbach, and his son Richard (Pat); his grandchildren, Kevin Marine (Suzette), Erin Hubbard, Zachary Hubbard (Caryn), Colin Marine (Jen), Matthew Marine (Andrea), Mandy Phillips Baum (John), Kimberly Phillips Jacko (Paul), Bryan Phillips (Michelle); many great grandchildren and great-great grandchildren; his brother Donald Hubbard, and several nieces. He is preceded in death by his wife of 59 years, Betty Hubbard, his brother William Hubbard, and his parents. The family wishes to express appreciation for the numerous friends and family and neighbors whose calls, visits, meals and support meant so much to him. A special thanks to his GWC church family and his Coastal Hospice Team. Funeral services will be held Thursday, May 20, 2021 at 11:00 a.m. at Short Funeral Home in Delmar, where a visitation will be held from 10:00 a.m. to 11:00. A private burial service with honors will follow at Eastern Shore Veterans Cemetery in Hurlock MD. In lieu of flowers, donations can be made to Gumboro Wesleyan Church 36842 Millsboro Hwy, Millsboro DE 19966, and Coastal Hospice 2604 Old Ocean City Blvd. Salisbury MD 21804. Arrangements are in the care of Short Funeral Home in Delmar. Online condolences may be sent to the family by visiting www.shortfh.com.

Wendell Holmes Hubbard Jr., 93, returned to his heavenly home on May13th, 2021 after a brief illness. His devotion to his family and his firm belief in God supported him through this time and gave him peace. Wendell was born to the late Wendell... View Obituary & Service Information

The family of Wendell H. Hubbard Jr. created this Life Tributes page to make it easy to share your memories.

Send flowers to the Hubbard family.