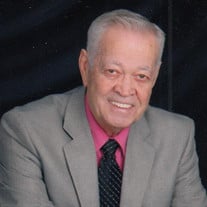 Warren L. Webster, 81, passed away on Friday, 12/6/2019, at his home in Laurel, DE, after putting up one heck of a battle against cancer for almost 4 years. Warren was born on 6/14/1938 in Hebron, MD, and was the last surviving child of 8 children born to Dorothy and Captain Dave Webster. A viewing and funeral service for Warren will be held on Tuesday, 12/10/2019, in the sanctuary of the First Baptist Church of Delmar, 501 Bi-State Blvd., Delmar, MD. The viewing will be from 11 AM - 12 noon, with funeral services beginning at noon. A dinner for family and friends will be held in the church Fellowship Hall immediately following the funeral service. Those who wish to participate in the committal service are encouraged to do so and should meet at 2:45 PM at the graveside in the Sharptown Firemen's Cemetery, Sharptown, MD. Warren graduated from Mardela High School with the class of 1957. He loved sports and was the co-captain of the soccer team in his junior and senior years. During that time, the team went undefeated, something about which Warren loved to reminisce. He was also a member of the MHS baseball and basketball teams. While a junior at MHS, Warren joined the U.S. Army Reserves and was given the nickname by his high school buddies of "Joe". After graduation, he served 6 months active duty, and then went to work for DuPont in Seaford, DE, for about 25 years. His last position there involved serving in management in the Textile Works Engineering Group. Warren and his first wife, Elaine Fletcher Webster, lived for many years in Sharptown, MD. Warren and Elaine, who pre-deceased him, were the parents of 3 children: Cindy Webster Bradley (Craig); Karen Webster Beach (Jim Corron); and Keith Webster. Warren (and Sarah) are the proud grandparents of 5 grandchildren: Kim Bradley Scott (Troy); Justin Bradley (Danielle); Erik Beach (fiancé Miranda Dickerson); Brittany Beach Banks (Jeremy); and Allie Beach. They are also proud of their 7 great grandchildren: Tyler Scott; Caleb Scott; Abby Grace Beach; Ellie Mae Beach; Kyleigh Chesley; Caden Banks; Silas Banks; and a much anticipated great grandson due around Christmas to Justin and Danielle Bradley. While at DuPont, Warren met and married Sarah Thompson from Georgia. During their almost 37 year marriage, Warren and Sarah sung mostly Southern Gospel music all over the Eastern Shore, usually at churches, weddings, funerals, and family and friend get togethers, but sometimes for civic organization events. Warren truly loved playing his guitar and singing. When he took early retirement from DuPont and Sarah was transferred to Georgia, music again played a big part in their lives as they continued their ministry of singing (sometimes with Sarah's brother, Billy Thompson), mostly for churches, nursing homes, and wherever they felt they could be a blessing and brighten someone's day. Warren and Sarah moved back to the Eastern Shore after she retired and have lived in the Laurel, DE, area for the last 9 years, thoroughly enjoying being back close to their family and loving their neighborhood in Riverview Acres in the Portsville area. Warren was very active in his church, First Baptist Church of Delmar, for the past 9 years, serving as a Trustee until health issues forced him to pull back. At that time, he was named an "honorary" Trustee, which he was so humbled by. He loved getting together with the Trustees for their coffee klatch club meeting until he was unable to drive due to his illness. In addition to being preceded in death by his first wife, Elaine, and his parents, Warren is pre-deceased by two infant brothers, Billy and Johnny; three brothers, David, Tom, and William Webster; and two sisters, Louise Beauchamp and Joyce Ann Phippin. He is survived by his second wife, Sarah; and all of his children, grandchildren, and great grandchildren. Also surviving Warren are Sarah's sister, Jane Thompson Fox; Sarah's brother and sister-in-law, Billy and Dorothy Thompson; and David's wife, Rosie Webster. Additionally, Warren has two surviving sisters-in-law, Shirley Bennett and Clarabelle Townsend. Warren has many nieces and nephews who survive him. Special thanks go out to Dr. Odilon Claravall (Laurel) and his staff, especially Julie Howard who worked tirelessly to help Warren and Sarah in whatever way was needed. Also, many thanks to Vitas Hospice for helping in such a professional, caring manner to allow Warren to remain at home until his life on this earth was complete. The care and love shown by both Dr. Claravall's office and the Vitas Hospice group are priceless to the family and will never be forgotten. If desired, memorial donations can be made in Warren's name to The First Baptist Church of Delmar, P. O. Box 200, Delmar, DE 19940, or to Vitas Hospice, 100 Commerce Dr., Suite 302, Newark, DE 19713. Arrangements are in the care of Short Funeral Home, Delmar. Online condolences may be sent to the family by visiting www.shortfh.com.

The family of Warren L. Webster created this Life Tributes page to make it easy to share your memories.

Send flowers to the Webster family.