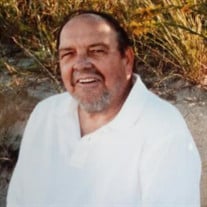 Walter J. Johnson, Jr., 75 passed away peacefully on Friday Oct 30th, 2020 at Delmar Nursing and Rehabilitation Center. He was born July 18, 1945 in Westover, Maryland, a son of the late Walter J. Johnson, Sr. and Juanita Hurley Johnson. Walt served in the U.S. Army. He enjoyed driving a truck and drove for Perdue Transportation and independent truck owners for most of his life. He and his wife Sandi formed W&S Trucking Company. After 20 years of operation of W&S Trucking Co, they made the decision to close the business due to health issues with his wife. Walt took a job at Ocean City, MD driving a transit bus and after a few years he drove a transporter hauling petroleum. The final stage of his career was driving a transportation van for Infinity Transport of Seaford, DE where he drove dialysis patients to appointments and special needs children to school. He met wonderful people and children doing this and treasured their friendship. He loved camping and having family and friends over for great times at his pool. Many great memories were made right there in the back yard. He is survived by his beloved wife of 30 years Sandra A. Johnson; a son, Walter James (Jimmy) Johnson III and wife Kim; a daughter, Merry Juanita Himmler; a stepson Ronald W. Morgan and wife Karrie; grandchildren, Walter James Johnson, IV, Krystal Johnson, Tye Himmler, Logan Himmler, Madalyn Sitzer and Byron Morgan; a brother, Tommy Johnson and wife Darla; a sister, Sandy Hickman and her husband Larry, Sr.; several nieces and nephews and a host of close friends from the trucking industry; and a lifelong friend, William (Billy) Wilson and his wife Shirley. Not to be forgotten are his 3 fur babies, Karma, Alex and Sammy. Memorial contributions can be made in his memory to: Brandywine Valley SPCA, 19022 Shingle Point Rd, Georgetown, DE 19947. A celebration of life will be at a later date. Arrangements are in the care of Short Funeral Home in Delmar. Online condolences may be sent to the family by visiting www.shortfh.com.

The family of Walter J. Johnson, Jr. created this Life Tributes page to make it easy to share your memories.

Send flowers to the Johnson, family.