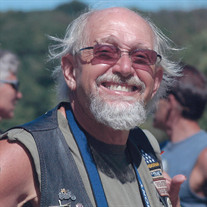 Walter F. Cohee, Jr., 71, of Mardela Springs, passed away on Saturday, February 9, 2019 at the University of Maryland Medical Center in Baltimore, Maryland. He was born on February 23, 1947 in Cambridge, Maryland, a son of the late Walter F. Cohee, Sr. and Alice Wheatley Cohee. Walt graduated from North Dorchester High school with the class of 1965 before proudly serving his country in the U.S. Air Force. Memberships included the American Legion Post 218 in Sharptown, Marine Corps League of Salisbury, Yellow Ribbon Society of Cincinnati, Ohio, Wounded Warriors of Sharptown, Toys for Tots, Operation We Care and Heroes Haven. He was a lifetime member of the Mardela Springs Fire Co. where he served in various capacities through the years. He retired as a machine mechanic for Delmarva Power in Vienna and Indian River, Millsboro, after 37 years of service. Walt especially enjoyed working on the James Harding farm. He enjoyed the outdoors, especially deer hunting and spending time at the beach. He was also a motorcycle enthusiast who supported many veteran’s causes through the various rides he participated in. All that knew Walt will remember his contagious smile, warm hugs, a good story and his overall love for people. He is survived by his wife, Jeanne Powell Cohee of Mardela Springs; a son, Kris Cohee of Mardela Springs; grandchildren, Marina Cohee, Christy Lathy, Alyssa Rivera and Sophia Rivera, all of Mardela Springs; a sister-in-law, Courtney Davis of Baltimore; and special friends, the Harding’s of Rhodesdale, the Catlin’s and the Donohoe’s of Mardela Springs, and Mike “The Watermelon Man” of Florida. In addition to his parents, he was preceded in death by his son, Staff Sargent Walter F. “Trae” Cohee, III; a brother, Michael R. Cohee; and mother-in-law, Pauline Powell; and father-in-law, Ollie Powell. A funeral service will be held at the Mardela Springs Volunteer Fire Department on Saturday, February 16, 2019 at 12:00 pm, where a visitation for family and friends will be held from 10:00 am to 12:00 pm. Interment with military honors will follow the service at East New Market Cemetery. In lieu of flowers, contributions may be sent to Mardela Springs Volunteer Fire Company, P.O. Box 299, Mardela Springs, MD 21837 or to Heroes Haven, P.O. Box 184, Sharptown, MD 21861. Arrangements are in the care of Short Funeral Home in Delmar. Online condolences may be sent to the family by visiting www.shortfh.com.

Walter F. Cohee, Jr., 71, of Mardela Springs, passed away on Saturday, February 9, 2019 at the University of Maryland Medical Center in Baltimore, Maryland. He was born on February 23, 1947 in Cambridge, Maryland, a son of the late Walter F.... View Obituary & Service Information

The family of Walter F. Cohee Jr. created this Life Tributes page to make it easy to share your memories.

Send flowers to the Cohee family.