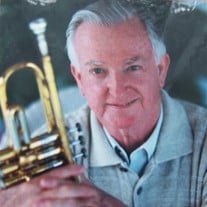 Vernon John “Cork” Walters, 89, a resident of Lewes, DE, passed away peacefully at home on February 8, 2019, surrounded by family and friends. He is survived by the love of his life, his wife of 65 years, Carol Elizabeth (Nedell), his children Nancy (Bill) Weller, Thomas (Trish) Walters, Janis (Jack) Dike, and Jeff (Claudia) Walters, 7 grandchildren whom he adored, his brother, Donald Walters and several nieces and nephews. He was preceded in death by his mother, Augusta and his father, Vernon Walters. He was born in Buffalo, NY on November 11, 1929, served in the Korean War, and married Carol Nedell in 1953. He worked for Wurlitzer in North Tonawanda. The family relocated to Maryland in 1960, where he worked for Kiplinger Washington Editors and then went on to work for the U.S. House of Representatives House Information Systems. Soon after his retirement in 1990, he and his wife moved to Lewes permanently, where they became members of Bethel Methodist Church in Lewes. He was a devoted father and husband, proud of his wife and four children, to whom he passed on many of his talents, particularly his sense of humor. Cork had a special knack for bringing a smile to the faces of all he met. He was a talented trumpet player, singer and musician, directing musicals and playing in bands his entire life. He was the consummate entertainer. He played in the Buffalo Bills band and later became an avid Redskins fan. He was a member of the Oak Orchard American Legion Post 28 in Millsboro. Special thanks to Delaware Hospice for their caring support. In lieu of flowers, the family requests that memorial donations be made to Delaware Hospice, 100 Patriots Way, Milford, DE 19963 or online at www.delawarehospice.org/donate or by calling 855-DHI-GIVE. A celebration of Cork’s life with military honors will be held at Bethel United Methodist Church, 129 W 4th Street, Lewes DE 19958 on Thursday, February 28, 2019 at 11:00 a.m. A visitation for family and friends will be held from 10:30 a.m. to 11:00 a.m. The Reverend Earle Baker will officiate. A reception will follow in the church fellowship hall. Arrangements are in the care of Short Funeral Home in Delmar. Online condolences may be sent to the family by visiting www.shortfh.com.

Vernon John &#8220;Cork&#8221; Walters, 89, a resident of Lewes, DE, passed away peacefully at home on February 8, 2019, surrounded by family and friends. He is survived by the love of his life, his wife of 65 years, Carol Elizabeth (Nedell),... View Obituary & Service Information

The family of Vernon "Cork" J. Walters created this Life Tributes page to make it easy to share your memories.

Send flowers to the Walters family.