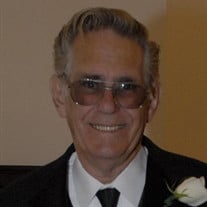 Terry Ryan, 81, of Salisbury, formerly of Mardela Springs, passed away Tuesday, September 5, 2017. He was born July 12, 1936 in Mardela Springs, a son of the late William King Ryan and Mary Ann (Robinson) Ryan. Terry attended Mardela High School before enlisting in the U.S. Navy, where he proudly served his country from 1954 to 1957 and had the distinction of being one of the first missile technicians in the Navy.He retired after a long career as a surveyor and draftsman with Hampshire, Hampshire and Andrews in Salisbury. He was a member of First Baptist Church of Mardela and a life member of the Sharptown Lions Club and was a recipient of the Melvin Jones Fellowship Award. He will be remembered as a devoted husband, father and grandfather. He is survived by his wife of 58 years, Barbara Ann Ryan, to whom he married on July 4, 1959; children, Michael R. Ryan (Marlene) of Virginia Beach, Virginia, Jeffrey A. Ryan of Mardela Springs and Lori R. Engle (Richard) of Westover, Maryland; grandchildren, Amanda Ryan, McKenna Ryan, Emily Engle and Jacob Engle; a great grandson, Luke Ryan; a brother, Richard Ryan of California; and an aunt, Marge Wilson of Mardela Springs. He is also survived by several nieces and nephews. In addition to his parents, he was preceded in death by a sister, Sharon Mosier. A visitation for family and friends will be held on Saturday, September 9, 2017 from 3:00 p.m. to 4:00 at Short Funeral Home in Delmar, followed by a funeral service which begins at 4:00. Pastor Bob Kampmeyer will officiate. Memorial contributions may be made in his memory to First Baptist Church of Mardela, P.O. Box 3, Mardela Springs, MD 21837. Arrangements are in the care of Short Funeral Home of Delmar. Online condolences may be sent to the family by visiting www.shortfh.com.

The family of Terry Ryan created this Life Tributes page to make it easy to share your memories.

Send flowers to the Ryan family.