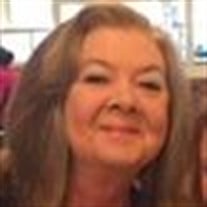 Delmar- Terri Sue Littleton, 64, of Delmar, passed away suddenly at Peninsula Regional Medical Center in Salisbury. She was born June 4, 1954 in Hampton, Virginia, a daughter of the late Warren Callaway and Ruth Young Schrier and her late stepfather, who raised her, Louis Schrier. Terri grew up in Delmar and attended Delmar High School. She worked as a cashier and manager at Pizza Boys in Delmar where she enjoyed helping others and loved the conversation with many of the regular customers. In her younger days she worked at the IGA in Delmar. She was a genuine people-person who took an interest in those around her no matter where she went. Terri’s family, especially her grandchildren, were her pride and joy. Trips to the slots and wine tastings were favorite activities. She will be remembered by many as a kind, selfless, compassionate and caring wife, mother, grandmother and friend to many. She is survived by her husband of 49 years, Alan C. Littleton of Delmar; daughters, Kim Johnson (Mark) of Milford and Kristine Littleton (Ron) of Delmar; beloved grandchildren, Michael, Becca, Christian, Cyle and Caidyn; a sister, Nancy Studer; and special nieces who were like her own children, Bethany and Grace Pennewell. She is also survived by several nieces and nephews and a host of wonderful friends. In addition to her parents, she was preceded in death by sisters, Jacque Taylor and Betsy Richardson. A visitation will be held on Tuesday, March 26, 2019 from 6:00 p.m. to 8:00 and on Wednesday March 27, 2019 from 11:00 a.m. to 12:00 at Short Funeral Home in Delmar, followed by a funeral service which begins at 12:00 noon. Interment will follow at St. Stephen’s Cemetery in Delmar. Memorial contributions may be made in her memory to Delmar Fire Department, P.O. Box 143, Delmar, DE 19940. Arrangements are in the care of Short Funeral Home in Delmar. Online condolences may be sent to the family by visiting www.shortfh.com.

Delmar- Terri Sue Littleton, 64, of Delmar, passed away suddenly at Peninsula Regional Medical Center in Salisbury. She was born June 4, 1954 in Hampton, Virginia, a daughter of the late Warren Callaway and Ruth Young Schrier and her late stepfather,... View Obituary & Service Information

The family of Terri Sue Littleton created this Life Tributes page to make it easy to share your memories.