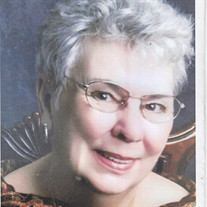 Salisbury- Shelby Joy Rusokoff, 80, of Salisbury, passed away Monday, January 8, 2018 after a long stay at Coastal Hospice at the Lake in Salisbury. She was born July 28, 1937 in Dunmore, West Virginia, a daughter of the late Forrest C. Griffin and Anna M. (Lowe) Griffin. In her younger days, Shelby worked as a Home Health Nurse then went on to a career as a pediatric nurse in Salisbury, a career she truly loved. In her free time she loved to sew and do embroidery, cross-stitching and was an avid reader, a passion that she passed on to her family. She was a cat lover and will be missed by her favorite cat, “Middy.” For many years she enjoyed her dinners and functions with Faye’s Dinner Group of Salisbury. She will be remembered as a loving wife, mother, grandmother, great grandmother, sister and friend to many. The family would like to extend a special thank you to the staff at Coastal Hospice at the Lake and also to Christine Rheinhardt and Pam Doyle for the wonderful care given to their wife, mother and grandmother over the past few months. She is survived by her husband of over 30 years, John Victor Rusokoff; a daughter, Cornelia Gray Richardson of Hollister, North Carolina; a son, Eli Don Blagg, Jr. and wife, Lena of York, Pennsylvania; grandchildren, Alicia Richardson (Jay), Christina Blagg-Spikloser (Louis), Eli Blagg, III (Lorraine) and Amie Blagg; great granddaughters, Erika, Kaitlin, Sophia, Bianca, Mia and MaLena; great grandsons, Gregory, Phillip and Matthew; and several nieces and nephews. In addition to her parents, she was preceded in death by sisters, Mabel Rexrode and Susie Griffin; brothers, Jack, Everett, Jim and Dick Griffin; and grandchildren, Tumeskia Richardson and Donald D. Richardson. A funeral service will be held on Thursday, January 11, 2018 at 10:00 a.m. at Short Funeral Home in Delmar, where a visitation for family and friends will be held from 9:00 a.m. to 10:00 a.m. Interment will follow later that afternoon at Resurrection Cemetery in Clinton, Maryland. Arrangements are in the care of Short Funeral Home in Delmar. Online condolences may be sent to the family by visiting www.shortfh.com.

Salisbury- Shelby Joy Rusokoff, 80, of Salisbury, passed away Monday, January 8, 2018 after a long stay at Coastal Hospice at the Lake in Salisbury. She was born July 28, 1937 in Dunmore, West Virginia, a daughter of the late Forrest C. Griffin... View Obituary & Service Information

The family of Shelby Joy Rusokoff created this Life Tributes page to make it easy to share your memories.

Send flowers to the Rusokoff family.