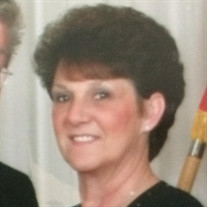 Sharon L. Shockley, age 70, formerly of Mardela Springs, passed away Sunday, August 13, 2017 at Florida Hospital in Tampa, Florida. Born December 1, 1946 in Salisbury she was raised in Mardela Springs by her loving adopted parents/grandparents the late Hubert and Dorothy Hostetter. Following graduation from Mardela High School, Sharon received her certificate of completion from the Delmarva Beauty Academy. She married Larry Shockley on August 14th, 1965. Together they raised their two daughters and doted on their four grandchildren. Sharon enjoyed cooking and being surrounded by her family. Her passion was taking care of her family. She is remembered as a loving wife, mother, and grandmother. She was an avid sports enthusiast her favorites included volleyball, softball and basketball. She passed on her passion to her children and grandchildren. She was a member of the First Baptist Church of Mardela. She is survived by a daughter and son-in-law, Sonya and Charles Black of Wesley Chapel, FL; grandchildren, Ashley Phippin and fiancé Joe Campitelli, Jordan Black, Kyle Brixner and Charleigh Black; sister-in-law Audrey English and Herman; several extended family members, nieces and nephews. In addition to her parents, Sharon was preceded in death by her husband of 45 years, Larry W Shockley (2010); daughter Wanda L. Brixner (2002); biological mother Anna Hostetter Dennis (2005); and brothers John Dennis and Phillip Dennis. A graveside service will be held at on Saturday, August 19th, 2017 at 1:00 pm at the Mardela Memorial Cemetery. Memorial contributions may be made in Sharon’s memory to: American Foundation for Suicide Prevention at afsp.org or the National Alliance on Mental Illness at nami.org Online condolences may be sent to the family by visiting www.shortfh.com. Arrangements are in the care of Short Funeral Home, Delmar. .

The family of Sharon L. Shockley created this Life Tributes page to make it easy to share your memories.

Send flowers to the Shockley family.