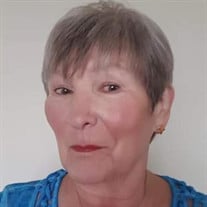 Sharon Hnatiuk Farrow passed peacefully on Friday, October 1st, 2021 at Saint Francis Hospital in Wilmington, surrounded by her children and grandchildren. Born February 24, 1946 in Millville NJ to the late Margaret Hnatiuk Young and Walter Benjamin (Benny) Hnatiuk. Sharon attended John Dickenson Highschool and it is here that she met her one true love, William W Farrow Sr.. They married October 10th 1964 and their family began to grow a year later. Sharon loved being a mother and caring for her children and husband. She would spend many afternoons with her children at local parks lying in the grass looking at the clouds to see what shapes they could see, going on nature walks, playing I Spy and I See a Color. Family fun time was often a game of hide and seek, whipped cream battles and card games. Sharon worked as a seamstress with her mother making slip covers for furniture when her children were young so that she was still able to be home. She used her sewing skills to make clothing for the family as well. Macrame was another skill that she excelled in and during the 70's made macrame curtains and plant hangers for her home. Later in life she enjoyed working in an antique shop and staging booths for the many vendors. After she retired, she found herself the caregiver for a dear woman with whom she formed a very special friendship and came to love like a mother, Jeane (MeMaw) Meyers. Always the caregiver, Sharon had a huge heart when it came to all of God's creatures, especially cats, dogs and birds. She fed many, many strays in the neighborhood even creating a safe haven in the garage for them in the winter months. She loved her fur and feathered babies dearly. Sharon enjoyed visiting nursing homes and visiting with residents that had no friends or family to visit with them and would often sing to them. She would also crochet and knit prayer blankets for those in need. She was a very selfless and giving woman. Sharon, always a kid at heart enjoyed collecting things that made her happy. She loved Betty Boop, Tweety Bird, Purses and M&M characters. One of her favorite past times was shopping. Always the Princess, she needed to keep a wardrobe fit for such a title. Most of all, Sharon enjoyed spending time with her husband, William. They went everywhere together. They spent time camping with the kids when they were young, learned to sail together and enjoyed riding their motorcycle together. Sharon and William were a shining example of true love. Sharon was preceded in death by her husband William Whiteley Farrow Sr. and brothers George Hnatiuk and Bruce Young. Survived by her daughter Shari L Norem and her husband Terry of Elkton MD, son William W Farrow Jr. and his companion Mary Quinlan of Gonic NH, son Mark C Farrow and his wife Romaine of Seaford DE; sister Diane Mingin of Millville NJ, sister Cynthia Waddington of Bear DE, sister Colleen Young of Springfield MO, brother Anthony Young of Sicklerville NJ; Grandchildren Justin L Farrow, Amanda Cheng, Crystal Mixon, Tyler Farrow, Katelyn Farrow, Mark Farrow, Dana Farrow and Megan Farrow; 15 great grandchildren and many nieces and nephews. A private graveside service for family to be held at Odd Fellows Cemetery in Seaford. Memorial contributions can be made to Alley Cat Allies. Arrangements are in the care of Short Funeral Home in Delmar. Online condolences may be sent to the family by visiting www.shortfh.com

The family of Sharon Hnatiuk Farrow created this Life Tributes page to make it easy to share your memories.

Send flowers to the Farrow family.