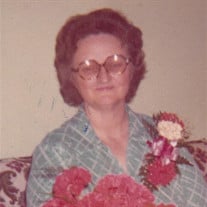 Rosie Mae Lewis of Salisbury, formerly of Willards, passed away peacefully on Sunday, September 22, 2019 at Salisbury Rehabilitation and Nursing Center. She was born August 15, 1932 in Berlin, Maryland, a daughter of the late Arthur W. Brittingham and Martha Ellen (Truitt) Brittingham. Rosie graduated from Pittsville High School with the class of 1950. After graduation she went to work as a seamstress for the Manhattan Shirt Factory. After the factory shut down, she went to work at the Willards Shirt Factory and retired in 2001 from the Powellville Shirt Factory. She loved to travel and enjoyed sightseeing trips to Tennessee and Florida. Rosie loved to crochet and blessed her family and friends with the many baby booties, afghans and doilies that she handmade for them. She will be missed as a loving mother, grandmother, great-grandmother and best friend. She was a longtime member of Eden United Methodist Church and past president of the UMW. She is survived by her son, James F. Lewis, Jr. of Salisbury; grandchildren, DJ, Doug, Melissa and Tiffany; and great grandchildren, Aidan, Benjamin, Dylan, Dustin and McKenzie. She is also survived by several nieces and nephews. In addition to her parents, she was preceded in death by her husband of 58 years, James, F. Lewis, Sr, (2009); a daughter, Bonnie Littleton (2015); a son, David E. Lewis, (2019); a brother, Arthur Brittingham, Jr.; and a sister, Patricia, who passed as an infant. A memorial service will be held on Sunday, September 29, 2019 at 3:00 p.m. at Eden United Methodist Church. The Reverend Danny Travers will officiate. Services are in the care of Short Funeral Home in Delmar. Online condolences may be sent to the family by visiting www.shortfh.com.

Rosie Mae Lewis of Salisbury, formerly of Willards, passed away peacefully on Sunday, September 22, 2019 at Salisbury Rehabilitation and Nursing Center. She was born August 15, 1932 in Berlin, Maryland, a daughter of the late Arthur W. Brittingham... View Obituary & Service Information

The family of Rosie Mae Lewis created this Life Tributes page to make it easy to share your memories.

Rosie Mae Lewis of Salisbury, formerly of Willards, passed away...