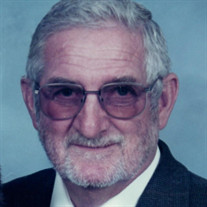 DELMAR- Roschen L. “Hilly” Hill, 84, of Delmar, passed away on Friday, June 29, 2018 at PRMC in Salisbury, Maryland. He was born on March 30, 1934 in Selbyville, the son of the late Douglas Houston Hill and Hannah Alberta Walls Hill. His mother passed away unexpectedly when Hilly was only 3 years old, and he was lovingly raised by his grandparents, the late Etta Melissa Houston Hill and Roy U.S. Grant Hill. Hilly attended Georgetown High School where he was the youngest player on the varsity football team. Football was his passion and he continued to play at the amateur level into his 30’s. He was a founding member of the Oak Orchard Volunteer Fire Company and continued to be a member for several years. Growing up he was a faithful member of Cokesbury United Methodist Church. After moving to Delmar he became a long time, very active member of St. Paul’s United Methodist Church in Laurel where he helped design and construct the monument which sits in front of the church. He retired after many years of service as an engineer on the railroad, which was owned by Penn Central and Conrail. During his years on the railroad he served as past-president of the Railroad Union and was a member of the Brotherhood of Locomotive Engineers. He also loved working on all of his farms and all that knew him will remember his love for being on his tractors. He cherished times spent at the winter home in Florida with his late wife, Rose Mary. When he was not on the tractor he was raising chickens and became the top grower for Townsend for several years. In his free time he enjoyed the outdoors, especially hunting, fishing and playing the occasional round of golf. He also had a fondness for NASCAR, loved bluegrass, country and gospel music and had an interesting train memorabilia collection. He kept his mind sharp by reading and finishing crossword and Sudoku puzzles. He is survived by his daughters, Cathi Hill Morrison of Winter Haven, FL, Cynthia Hill of Washington DC, Christy Anne Hill Suriner (Stephen) of Hinsdale, MA, and Chris Carmine (Paul) of Harrington, DE; eleven grandchildren, Thomas Morrison II, Melissa Morrison, Royanne Hammond, Sarah Dai Hammond, Caitlin Hammond, Alexandra Hammond, Ashley Carmine, Samantha Mitchell, Mikie Adkins (wife Anna), Jessica Backes and Karis Butler: ten great grandchildren, Daisy and Isla Morrison, Madison Burd, Scout Armstrong, Annie Dai Ellman, Ryleigh and Mackenzie Swope, and Hannah, Jacob and Grace Adkins ; a sister, Patricia Louise Hill Kuhns of Dover; and a nephew, Alan Wesley Kuhns of Dover. In addition to his parents, he was preceded in death by his wife, Rose Mary Hill; daughters, Teresa T. Mitchell and Anna “Muffy” Adkins; and a brother-in-law, Wesley Kuhns. A funeral service will be held at 11:00 a.m. on Monday, July 2, 2018 at Short Funeral Home, 13 E. Grove Street in Delmar. A visitation for family and friends will be held one hour prior to the service. Interment will follow the service in Bridgeville Cemetery. In memory of Mr. Hill, contributions may be sent to St. Paul’s U.M. Church, 32827 Old Stage Road, Laurel, DE 19956. Arrangements are in the care of Short Funeral Home of Delmar. Online condolences may be sent to the family by visiting www.shortfh.com.

The family of Roschen Logan "Hilly" Hill created this Life Tributes page to make it easy to share your memories.

Send flowers to the Hill family.