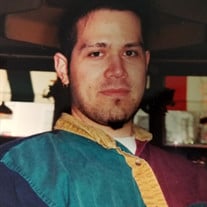 LAUREL- Ronnie L. Hastings, Jr., 45, of Laurel, passed away peacefully on Monday, September 10, 2018 at Nanticoke Memorial Hospital. He was born January 22, 1973 in Salisbury, a son of Ronnie L Hastings, Sr. and the late Antoinette V. Hastings. Ronnie graduated from Delmar High School with the class of 1991. He was raised in Delmar where he played little league, was an avid sports memorabilia collector and a faithful fan of the Chicago Bears and Duke basketball. His true passion was music as he was a member of several bands. Ronnie will be remembered as an accomplished singer, guitar player and a composer of songs and poems. He loved playing video games and working with computers and for over 20 years worked as a graphic and web designer. He is survived by his wife of over 21 years, Nicole E. (Atkinson) Hastings, to whom he married on January 12, 1997; his son, Ronnie L. Hastings, III; his father, Ronnie L. Hastings, Sr. and his fiancée, Connie Brumbley; a sister, Debbie Holland; his father-in-law, Bruce Anthony; mother-in-law, Brenda Liddell; and his wife’s special grandmother, Elaine Phillips. He is also survived by several aunts and uncles, nieces and nephews, cousins and brothers-in-law and sisters-in-law. A funeral service will be held on Monday, September 17, 2018 at 11:00 a.m. at Short Funeral Home in Delmar. Interment will follow at St. Stephen’s Cemetery in Delmar. Following the committal service, everyone is welcome to join the family at the fellowship hall at Holy Redeemer Church in Delmar for a time of food and fellowship. In lieu of flowers, contributions may be made to Nicole Hastings to help with funeral costs. Arrangements are in the care of Short Funeral Home in Delmar. Online condolences may be sent to the family by visiting www.shortfh.com.

The family of Ronnie L. Hastings Jr. created this Life Tributes page to make it easy to share your memories.

Send flowers to the Hastings family.