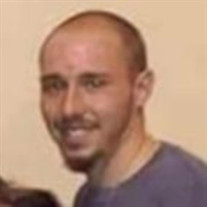 Ronald “Ronnie” L. King, II, 31, of Salisbury, passed away at his home on Monday, September 20, 2021. He was born August 15, 1990, in Salisbury, a son of Ronald L. King and Norma Gayle Jones. In his younger days, Ronnie worked several years as a manager at LIDS in the Salisbury Centre. For the last year he has worked as a saw operator at Eastern Shore Metals in Seaford. His love of music led him to also working nights and weekends as a DJ and was known as “Madmandjrk” From an early age he loved all genres of music but had a special place in his heart for Metallica and 80’s hair bands. Ronnie was also a huge fan of Harry Potter and Star Wars. He is survived by his father, Ronald L. King and wife, Tammy of Delmar; his mother, Norma Gayle Jones and fiancé, Chris Kneipp of Salisbury; fiancée, Diamond Keys; brothers, Stephen R. King, Joey N. King and Allen Townsend; stepbrothers, Brian Ehrisman, Tyler Starnes and Alex Mohr; stepsister, Rose Young; step grandparents, James and Anna Hurley; God parents, Ellen and Daniel Bowden; and a host of aunts, uncles, cousins and close friends. He was preceded in death by grandparents, Iva B. and Walter David King, Norman F. Jones and Brenda G. Hall; and step-grandfather, Roland Lee Hall. A celebration of Ronnie’s life will be held on Friday, October 1, 2021 at 2:00 p.m. at Short Funeral Home in Delmar, where family and friends may visit between 1:00 and 2:00. In lieu of flowers, donations can be sent to the Benefit of Ronnie King, II, Bank of Delmarva, c/o Ellen Bowden, 9550 Ocean Highway, Delmar, MD 21875 or by visiting any Bank of Delmarva branch to help defray the funeral expenses. Arrangements are in in the care of Short Funeral Home in Delmar. Online condolences may be sent to the family by visiting www.shortfh.com.

The family of Ronald L. King II created this Life Tributes page to make it easy to share your memories.

Send flowers to the King family.