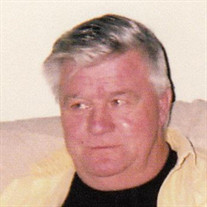 Ronald E. Collins, 62, of Seaford, passed away peacefully on Saturday, May 2, 2020 at his home. He was born May 28, 1957 in Seaford, a son of the late Douglas Elliott Collins and Alma B. Collins Miller. Ronnie spent his younger years in Sharptown and graduated from Mardela High School with the class of 1975. In his early years he attended Asbury United Methodist Church in Sharptown. After high school he enlisted in the U.S. Navy and served for 10 years. This is where he learned to work with radar and throughout his career he worked as a radar technician as a contractor with NASA and NOAA in Wallops Island. He enjoyed antiquing and had a passion for old guns. He will be missed dearly by his wife and family and even more by his dog “Killer,” who he also simply referred to as “Puppy.” He is survived by his wife, Mary Lynn Collins; a son, Paul Collins of Georgia; step-sons, who called him “Dad,”, Stephen Kirby of Maryland, John Kirby of Vermont, Charles Kirby of Maryland and Scott Kirby and his wife, Jennifer Rodriguez of Seaford; grandchildren, Kirsten, Isabella, Josiah, Olivia and John Kirby and Ana Cote; brothers, David Collins and Donald Collins and wife, Amy, all of Sharptown; and a sister, Ruth Daisey and her husband, Bruce of Selbyville. He is also survived by several nieces and nephews. In addition to his parents, he was preceded in death by grandparents, Paul and Marion Collins and Fred and Mary Bennett. A celebration of Ron’s life will be held on Monday, April 26, 2021 at 3:00 p.m. at the Pavilion at Cherry Beach in Sharptown. The Reverend David Bennett will officiate. In lieu of flowers, please make a donation in Ronnie’s memory to support disabled veterans by visiting https://www.dav.org/ . Arrangements are in the care of Short Funeral Home in Delmar. Online condolences may be sent to the family by visiting www.shortfh.com.

Ronald E. Collins, 62, of Seaford, passed away peacefully on Saturday, May 2, 2020 at his home. He was born May 28, 1957 in Seaford, a son of the late Douglas Elliott Collins and Alma B. Collins Miller. Ronnie spent his younger years in Sharptown... View Obituary & Service Information

The family of Ronald E. Collins created this Life Tributes page to make it easy to share your memories.

Ronald E. Collins, 62, of Seaford, passed away peacefully on...