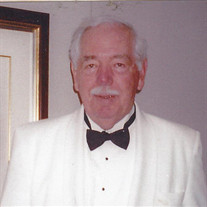 Delmar- Robert Lloyd “Bob” Pase, 82, of Delmar, took his journey home to Heaven on Saturday, December 15, 2018. Bob was born in Thomas, West Virginia on April 8, 1936, a son of the late Boyd Robert Pase and Thelma Cogar Pase. Bob left school in 11th grade to join the U.S. Air Force and proudly served his country until his service was regrettably shortened due to an injury he incurred. After his return home he went back to graduate from Milford High School. His military service and the birth of his daughters were some of his proudest accomplishments. He worked for A&P Grocery Store, later to be changed to Super Fresh, and retired as store director after 37 years of service. He was a member of the Seaford Moose and the American Legion in Delmar. He loved his Friday night card games, rooting for the Redskins, Baltimore Orioles and West Virginia Mountaineers basketball. Bob loved the outdoors, fishing and sitting on his front porch watching the people go by. He will be remembered as a loving husband, father, grandfather and brother and a true family man who could always be found with a grandchild on his lap. He is survived by the love of his life Mary Lee Pase, to whom he married on August 22, 1990; daughters, Debbie Speicher and Barbie Morgan both of Lewes; step-children, Charlie Smith (Trisha) and Terri Addlesberger (Blaine) all of Delmar; and grandchildren, Nicole Macklin, Clarke Speicher, Robbie Macklin, Stacy Baker (Neil), Jonathon Smith, Sadie Addlesberger, and Nicholas Smith; great-grandchildren, Joshua Hodge, Rylee Farris, Cole Macklin, and Landen Macklin; sisters, Julia Miltenberger and Peggy Schrock both of Milton; a brother, James Pase of Arizona; and several nieces and nephews. A funeral service will be held at 1:00 p.m. on Sunday, December 23, 2018 at Short Funeral Home, 13 E. Grove Street in Delmar, where a visitation will be held from 12:00 to 1:00. Interment with military honors will follow. Pastor Marilyn Searcey will officiate. Memorial contributions may be made in his memory to the American Cancer Society by visiting https://www.cancer.org/ or to Delmar Fire Department, P.O. Box 143, Delmar, DE 19940. Online condolences may be sent to the family by visiting www.shortfh.com.

The family of Robert Lloyd Pase created this Life Tributes page to make it easy to share your memories.

Send flowers to the Pase family.