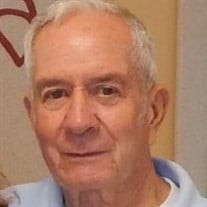 Robert Carl “Bob” Landes, beloved husband, brother, father, and Pop-Pop passed away at home in Wickenburg Arizona on March 13, 2019, at age 86. He was an avid hiker and nature lover, and dedicated to serving others through volunteering. In addition to his work as a researcher and technical writer for ICI/Adria Laboratories in Wilmington DE and Columbus OH, he was an author, photographer and songwriter. But throughout his life and his accomplishments, his family always came first. Through the countless baseballs (and occasional tomato) pitched to his daughter in the backyard, the horsey rides for his grandchildren even when his knees hurt, and so much more, his family always knew how much he loved them. He treasured the solitude of nature and hiking the Grand Canyon rim to rim as he did multiple times, but he also loved trading jokes or writing songs with others. Born in Philadelphia to Carl and Martha (Graber) Landes, Bob grew up in several places around the country, including Buena Vista CO, Bluffton OH, and Merom IN. He attended Bluffton College and The University of Alabama, received his PhD from Tulane University, a second Masters’ Degree from The Ohio State University, and was a U.S. Army veteran. After several years in Wilmington DE, he and his wife Janice settled in Hilliard OH to raise their family, then moved to Laurel DE after retirement, and then to Wickenburg AZ. His deep-rooted dedication to helping others inspired him to volunteer at literacy organizations, and to work with adults with disabilities at Easter Seals in Columbus OH and Georgetown DE (where he was known as “Mr. Bob”) and at Holly Center in Salisbury MD. Through these experiences he forged lifelong friendships with many of the people he met. He is preceded in death by his parents, his brother James Landes and sister-in-law Carol Landes. He is survived by his wife Janice (Haddock), daughter Karen, son-in-law Joseph Kim, grandchildren Darwin and Elijah Kim, sister Elfrieda Ramseyer and brother-in-law Dick Ramseyer. A graveside service will be held at St. Stephens Cemetery, Delmar DE on Friday, March 29 at 2pm. You may leave condolences and memories at www.shortfh.com In lieu of flowers, you could make a donation to Easter Seals of Delaware, or just go for a hike, read a good book, eat an Oreo, and make the world a little better in Bob’s honor.

Robert Carl &#8220;Bob&#8221; Landes, beloved husband, brother, father, and Pop-Pop passed away at home in Wickenburg Arizona on March 13, 2019, at age 86. He was an avid hiker and nature lover, and dedicated to serving others through volunteering.... View Obituary & Service Information

The family of Robert Carl Landes created this Life Tributes page to make it easy to share your memories.

Send flowers to the Landes family.