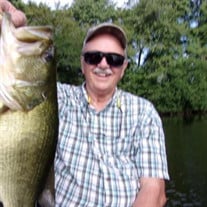 Robert “Bob” Anthony English, Sr., 74, of Snow Hill, passed away peacefully on Thursday, August 5, 2021 at Bayhealth Hospital, Sussex Campus in Milford. He was born February 2, 1947 in Millsboro, Delaware, a son of the late Stansbury Preston English and Sarah Twitchell English. Bob grew up on a farm which is where his strong work ethic was shaped. He graduated from Laurel High School with the class of ’65. A little over a year after graduation he married Sandra Shockley of Snow Hill, and together they enjoyed almost 55 years of marriage. Most of his career involved jobs in law enforcement as a park ranger at Assateague State Park followed by several years with the Fruitland Police Department. After retirement, he took a job for several years as a service repairman with Holt Paper Company. He was a 32nd degree Mason and a long-time member of Wicomico Lodge #91 AF & AM in Salisbury. Hobbies included woodworking, he could build or fix almost anything, and was constantly ready to lend a hand. He loved his boat and fishing, and always wanted to share the experience with others. When he was at home, he and his trusty 4 legged sidekick, Moses, could be found tending to their treasured chickens. He also loved building and collecting lighthouses and had a passion for stained glass projects. He was always ready to design an original creation for a friend. Bob kept a positive attitude, even in his last days, and always lived by his favorite saying, “Every day’s a holiday.” He will be missed by his family, wife, Sandra Shockley English, married September 2, 1966; children, Robert “Robbie” A. English, Jr. of Salisbury, Shelly English Jackson and husband Greg, who he considered a second son, of Newark, and Angie Perry and husband, Alan of Rolesville, NC; a special cousin, who was like a sister to him, Anna Lee Shockley of Snow Hill; grandchildren, Zoe Elizabeth Jackson, Benjamin Avery Jackson, Nicholas Rhodes, Elise Perry and Evan Perry; brothers, Kenneth Vigue and special friend Brenda of Kentucky and John English and wife Bonnie of Centreville, MD; sisters, Carla Willey and companion Tommy Lane of Laurel and Martha Stevenson of Georgetown; and many nieces and nephews. In addition to his parents, he was preceded in death by a daughter, Lisa Michelle English and a sister, Judith Reed. A visitation for family and friends will be held on Tuesday, August 10, 2021 from 6:00 p.m. to 8:00 at Short Funeral Home in Delmar, and also on Wednesday, August 11, 2021 from 10:00 a.m. to 11:00. A Masonic service will begin at 11:00, followed by funeral services. The Reverend Tom Northam will officiate. Interment will follow at Mt. Olive Cemetery in Snow Hill. Memorial contributions may be made in his memory to the Shriners Children’s Hospital by visiting https://lovetotherescue.org/ Arrangements are in the care of Short Funeral Home in Delmar. Online condolences may be sent to the family by visiting www.shortfh.com

The family of Robert A. English Sr. created this Life Tributes page to make it easy to share your memories.

Send flowers to the English family.