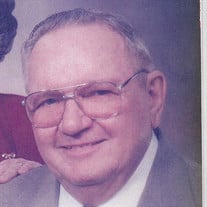 Robert H. “Bob” Boody, 91, of Delmar, passed away on Sunday, February 3, 2019 at his home. He was born on May 11, 1927 in Bloomsburg, Pennsylvania, the son of the late Leonard R. and Martha W. Boody. Bob was a WWII veteran. He enlisted in the U.S. Navy when he was seventeen years old, serving in the Atlantic and Pacific theaters on the aircraft carrier USS Tarawa. Later in life, he enlisted in the U.S. Naval Air Reserve and finally retired from that service as a Petty Officer First Class in electronics. He married his childhood sweetheart Molly in 1947, who preceded him in death, and they had seven children. Their marriage lasted 70 years until Molly died in January 2018. Bob began his career with the Bell Telephone Company of Pennsylvania in 1950 and retired as a special services supervisor from that company in 1980. He was always involved with many service organizations throughout his lifetime and was a past director of the Delmar Public Library. He was a devoted member of the Kiwanis Club of Delmar and an active church member until age and medical problems forced him to give those up. Bob loved being on the water and to fish. He owned and operated several boats in the past including power boats and sailboats. He and his family enjoyed 27 years of weekend boating on the Chesapeake Bay, plus several Bareboat vacations to the British Virgin Islands. Bob is survived by his children, Susan Johnson of Maryland, Daniel Boody of Florida, Barbara Randolph (Randy) of Tennessee, Elizabeth Blanton (Joe) of Florida, Margaret Greenwood (Jim) of Florida, and Stephen Boody (Dawn) of Pennsylvania; a brother, William Boody; and a nephew, Donald Shollenberger. In addition to his parents, he was preceded in death by his wife, Mary R. “Molly” Boody; and a son, David R. Boody. A memorial service will be held at 11:00 a.m. on Saturday, March 23, 2019 at All Saints Episcopal Church, 100 North 10th Street, Delmar, Delaware. The Reverend Kenneth Athey will officiate. In lieu of flowers, memorial contributions may be sent to All Saints Episcopal Church, PO Box 88, Delmar, DE 19940. Arrangements are in the care of Short Funeral Home in Delmar. Online condolences may be sent to the family by visiting www.shortfh.com.

The family of Robert H. Boody created this Life Tributes page to make it easy to share your memories.

Send flowers to the Boody family.