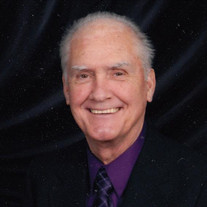 HEBRON- Robert “Bob” Franklin Thompson, 77, of Hebron, went home to be with his Lord and Savior on Wednesday, June 21, 2017 at Peninsula Regional Medical Center in Salisbury. He was born December 8, 1939 at home in Melsons, Maryland, a son of the late Halsey Harrison Thompson and Martha Lola (Ardis) Thompson. Bob enjoyed working for several companies throughout his career. He started with Chris Craft Boats in Salisbury then worked for Trailways Bus Company, where he drove a bus for several years before moving into dispatch. Other jobs he held were with Central Electric and Montgomery Ward, where he sold tires in the automotive department. His last job before retiring due to health issues was at Gillis Gilkerson, where he enjoyed driving a truck. After retirement he devoted his free time to studying the bible and proudly read through several translations. He was a long time, active member of First Baptist Church of Delmar, where he taught Sunday school for many years and loved leading the Senior Women’s Bible Group. He also led the Wednesday night bible study at First Baptist Church in Mardela Springs for several years. In addition to his bible studies, he also was a people lover and was generous with his hugs. He is survived by his wife of over 58 years, Judith D. (Shorter) Thompson; children, Debra Kampmeyer and husband, Bob of Mardela Springs, Edward H. Thompson and wife, April of Delmar, Mary Ellen Thompson of Hebron, David A. Thompson and wife, Laura of Salisbury and Rob Thompson and wife, Tina of Delmar; 9 grandchildren, Joey Thompson (Danielle), Robin Hurley, Jennifer McCrorey (Bobby), Ryan Thompson, Brandon Thompson (Kim), Ethan Thompson, Whitney Thompson, Tyler Thompson (Melanie) and Shaina Thompson; 8 great grandchildren, Kelsey, Chase, Hayden, Dylan, Reese, Teagan, Addison, and Averie; and many nieces and nephews. In addition to his parents, he was preceded in death by a brother, Lewis Thompson; and sisters, Alice, Fannie, Betty June and Ruth. A visitation for family and friends will be held on Monday, June 26, 2017 from 7:00 p.m. to 8:30 p.m. at Short Funeral Home in Delmar, and also on Tuesday from 12:00 to 1:00. Funeral services will begin at 1:00 p.m. on Tuesday at the funeral home. Pastors Tim Coffey and Robert Kampmeyer will officiate. Interment will follow at Hebron Cemetery. Memorial contributions may be made in his memory to First Baptist Church of Delmar, P.O. Box 200, Delmar, DE 19940. To send online condolences to the family, please visit www.shortfh.com. Arrangements are in the care of Short Funeral Home of Delmar.

HEBRON- Robert &#8220;Bob&#8221; Franklin Thompson, 77, of Hebron, went home to be with his Lord and Savior on Wednesday, June 21, 2017 at Peninsula Regional Medical Center in Salisbury. He was born December 8, 1939 at home in Melsons, Maryland,... View Obituary & Service Information

The family of Robert "Bob" F. Thompson created this Life Tributes page to make it easy to share your memories.

Send flowers to the Thompson family.