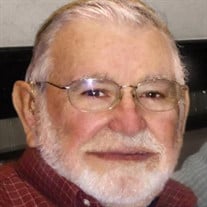 Salisbury, Maryland -- Robert Lee Alexander Sr., 83, died peacefully at home on Tuesday, October 6, 2020 after a courageous battle with cancer. Robert (Bob) was born on June 12, 1937 In Salisbury Maryland. He is preceded in death by his parents Henry A. Alexander and Margaret E. Mitchell Alexander and elder brother Charles Alexander (died as an infant). As a very young man Bob worked part-time at Wallers Electric rewiring motors, where he was told he had a talent for fixing things. That talent was showcased through the many unique hunting and fishing accessories he invented and shared with friends. He began what would be a lifelong career in plumbing and heating when Richard Parsons with R.H. Pollard Plumbing and Heating, Co. hired him as a temporary plumber’s helper which quickly became a full-time job. They had a mutual respect for one another and became great friends. Bob eventually left R.H. Pollard to begin his own plumbing and heating business, Robert L. Alexander Plumbing and Heating, Inc. He loved his customers and they were very loyal to him. His business was very successful until he suffered his first of four bouts with cancer. Bob had a love for the great outdoors. Bob was a pioneer of bowhunting on the Eastern Shore of Maryland. He was a skilled hunter and fisherman, and mastered the recurve bow, compound bow, cross bow and fire arms including muzzle loaders, rifles and shotguns. He was a member of the NRA. He taught the tracking course as a certified instructor for The Maryland State Bowhunter’s Safety Course many years ago. He was also a Lifetime Member of The Maryland Bowhunters Association, a member of Bucks and Bows Club, and a recipient of an award with the Nassawango Sportsman Club. He was a member of The Redman’s Lodge in Fruitland , Maryland. Bob was an avid reader of American History and numerous sporting magazines. In his late 70’s he even became proficient on the computer! He loved the internet and the world it opened for him; especially Facebook because it connected him to friends and family. He is survived by the love of his life, his wife of 54 years, Mary Ruth Alexander of Salisbury, MD; his sisters Joann Coffin (Bob) of Salisbury, MD, Dorothy Parker (Stan) of Felton, DE, and Peggy Adams (Nick) of Yorktown, VA; his children Theresa Hochmuth (Bob) of Lake City, FL, Robert Alexander, Jr. (Jill) of Bethany Beach, DE, and Lisa Hastings (Kevin) of Salisbury, MD; his grandchildren Jessica Owens (Zadian), Scott Hochmuth (Jenna), Lee Hochmuth (Lana), Amy Owens, Robert “Trey” Alexander III (Kelsey), Carly W. Carrier (Chance), James Whaley,Tyler Hastings (Paige), and Cody Hastings; his great grandchildren Calie, Carter, Conor, James, Logan, Maliyah, Olivia, Rowan, Taylor and Zana; as well as numerous nieces and nephews. Due to COVID-19 restrictions we will have a celebration of life in the near future. Family and friends will be notified. Arrangements are in the care of Short Funeral Home in Delmar. Online condolences may be sent to the family by visiting www.shortfh.com.

Salisbury, Maryland -- Robert Lee Alexander Sr., 83, died peacefully at home on Tuesday, October 6, 2020 after a courageous battle with cancer. Robert (Bob) was born on June 12, 1937 In Salisbury Maryland. He is preceded in death by his parents... View Obituary & Service Information

The family of Robert Lee Alexander created this Life Tributes page to make it easy to share your memories.

Send flowers to the Alexander family.