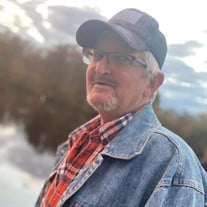 Robert Franklin “Frankie” Adkins, 63, of Laurel, passed away Thursday, January 13, 2022 at Delaware Hospice Center in Milford, after a long and courageous battle with cancer. He was born July 17, 1958, in Seaford, a son of the late Robert Lee Adkins and Emma Jean (Wilkerson) Adkins. After leaving school, Frankie served his country in the DE National Guard. He was a gifted mechanic who could fix anything and had a work ethic second to none. It was normal for Frankie to have several jobs at the same time as he loved to be productive. In his early days, his career as a mechanic started with W.C. Littleton in Laurel. From there he joined Perdue and retired after many years of service. After retirement he worked with Dennison Landscaping, East Coast Campers and even helped his father-in-law in the HVAC business whenever he could. He was a member of the Seaford Moose Lodge #1728 and the American Legion, Post 19 in Laurel. Frankie loved camping and spent a lot of time with family and friends at Trail’s End in Horntown. Cornhole was a passion of his and he was responsible for starting a cornhole league at Trail’s End. He also loved NASCAR and was an avid Earnhardt fan. In addition to the big races, he also liked going to the local tracks in Delmar and Georgetown. The Dallas Cowboys were Frankie’s favorite team and he enjoyed the weekly banter amongst his Eagles and Redskins friends. And most importantly, when he needed to slow down, he truly enjoyed traveling and especially loved cruises. He is survived by his beloved wife, Josephine “Jo” L. Adkins; sons, Snapper Adkins (wife, Crissie) and Chris Adkins; daughter, Dawn Litchford (husband, Steve); grandchildren, Angel Adkins (fiancé, La’Bron), Kaitlyn Adkins (fiancé, Caleb), Kylee Adkins and Jase Litchford; siblings, Keith Adkins, Mark Adkins (wife, Gayle), Belinda Sparks (husband, Richard), Teresa Adkins and Ralph Adkins (wife, Tracey); sister-in-law, Deby Benson (husband, Clark); brother-in-law, Howard Spencer; and many nieces, nephews and a host of close friends. A celebration of Frankie’s life will be held on Wednesday, January 19, 2022, at 2:00 p.m. at Short Funeral Home in Delmar, where family and friends may call from 1:00 to 2:00. Pastor John Rogers will officiate. Interment will follow at Odd Fellows Cemetery in Laurel. In lieu of flowers, memorial contributions may be made in his memory to Delaware Hospice, 100 Patriots Way, Milford, DE 19963 or the American Legion, Post 19, 12168 Laurel Rd, Laurel, DE 19956. Arrangements are in the care of Short Funeral Home in Delmar. Online condolences may be sent to the family by visiting www.shortfh.com.

The family of Robert Franklin Adkins created this Life Tributes page to make it easy to share your memories.