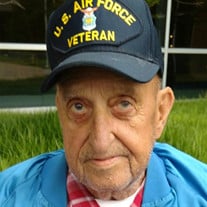 DELMAR- Robbie B. Jones, 85, of Delmar, passed away at his home on Thursday, July 4, 2019. He was born in Unicoi, Tennessee on July 21, 1933, a son of the late George W. Jones and Cordia Smith Jones. Robbie retired in 1978 as a Sr. Master Sergeant in the United States Air Force after 26 years of service. After retirement he worked many years as an HVAC technician and Master electrician for Griffin Air Conditioning, George L. Ralph and Milford Twilley Co. During his time in the Air Force, Robbie was stationed in the Philippines, Thailand and most importantly in Okinawa, Japan, where he fell in love with his sweetheart, Aiko Nema. They married on April 2, 1975 and enjoyed 40 years of marriage together until she passed in 2015. Memberships included the Delmar American Legion, the Disabled American Veterans and the Masonic Lodge #91 in Salisbury. He is remembered as a master storyteller, sportsman and gardener who enjoyed raising chickens and fishing and hunting. He is survived by his daughter, Megumi Hull and her husband Brian of Delmar; grandchildren, Geoffrey Dugan of Delmar, Thomas Hull of Delmar and Allan Hull of Texas; a great granddaughter, Freyja Hull; a sister, Evelyn Byrd of Salisbury; brothers, Bob Jones and his wife, Janice of Salisbury and Julius Jones and his wife, Linda of Casselberry, Florida; and several nieces, nephews and cousins. He is also survived by the family dog, “Abra.” In addition to his parents and beloved wife, he was preceded in death by a sister, Willa Mae Buckmaster; and a brother, Joseph Jones. Services will be private at his request. Arrangements are in the care of Short Funeral Home in Delmar. Online condolences may be sent to the family by visiting www.shortfh.com.

The family of Robbie B. Jones created this Life Tributes page to make it easy to share your memories.