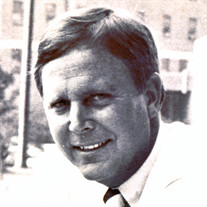 Richard Lee “Rick” Cullen, 74, of Delmar, died Friday, February 2, 2018 at his home in Delmar. He was born September 2, 1943 in Salisbury, a son of the late Charles M. Cullen and Marguerite Pusey Cullen. Rick lived in Delmar for the majority of his life. He graduated from Delmar High School with the class of 1961 where he was a proud member of the Delmar Wildcats football team and the championship team of 1959. After attending Missouri Valley College he returned to Delmar. He landed a job at the Salisbury Times in the sports department where he worked for two years before proudly serving his country in the U.S. Marine Corps. Two years later, he returned to Delmar and returned to the Daily Times as a beat reporter. In 1972 he was promoted to Sports Editor, a career he thoroughly enjoyed until his retirement in 1996. In 1999 he went back to work for Morning Star Publications as an advertising consultant and still held that position at the time of his death. He was a member of St. Stephen’s United Methodist Church in Delmar for many years. Rick was an avid golfer who loved playing at Hooper’s Landing in Seaford and was a past member of Seaford Golf and Country Club and Sussex Pines. Rick will be remembered as a faithful fan of the Cleveland Indians and Baltimore Ravens. He is survived by his wife of 38 years, Judith Long Cullen; a daughter, Lee R. Cullen of Delmar; sons, David Frey (Teresa) of Delmar, Matthew Frey of Springfield, Virginia and Jonathan Frey of Laurel; 7 grandchildren, Cristina Frey, Caitlin Stiegler, Bailey Frey, Lauren Frey, Cameron Frey, Mason Frey and Benn Frey; 2 great grandchildren; and a nephew, Eric Cullen of New Jersey. In addition to his parents, he was preceded in death by a brother, Charles M. Cullen; and a special uncle and aunt, Richard and Mabs Cullen. A memorial service will be held on Thursday, February 8, 2018 at 1:00 p.m. at Short Funeral Home in Delmar, where family and friends may call from 11:00 a.m. to 1:00 p.m. The Reverend Phyllis Walton will officiate. Memorial contributions may be made in his memory to St. Stephen’s United Methodist Church, 101 E. State Street, Delmar, DE 19940 or to Delmar High School, Delmar Football Team, c/o David Hearn, 200 N. 8th Street, Delmar, DE 19940. Arrangements are in the care of Short Funeral Home in Delmar. Online condolences may be sent to the family by visiting www.shortfh.com.

The family of Richard "Rick" L. Cullen created this Life Tributes page to make it easy to share your memories.

Send flowers to the Cullen family.