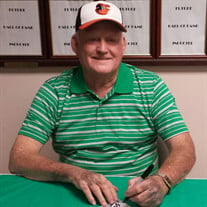 SALISBURY- Richard Howard Griffith, affectionately known by many as “Reds,” 79, of Salisbury, formerly of Sharptown, died Saturday, April 21, 2018 at Peninsula Regional Medical Center in Salisbury. He was born November 30, 1938 in Trenton, New Jersey, a son of the late Howard “Buck” Griffith and Bertha (Meyers) Griffith. Richard spent most of his life in his beloved Sharptown. He graduated from Mardela High School with the class of 1956 where he was a well- known, accomplished pitcher for the Mardela baseball team. He also played ball for the Sharptown American Legion squad and they were instrumental in helping him hone his pitching skills. Right out of high school Reds was recruited by the Washington Senators and played several years for their AAA team. He enlisted in the U.S. Army and even played several years for the Army while stationed in Germany. After returning to the states his passion for baseball continued as he coached slow pitch and men’s modified softball for many years as he was able. In 2001 he was honored with induction into the Eastern Shore Baseball Hall of Fame. In addition to baseball and softball, Reds loved fishing and spending time on the Nanticoke River. He retired from Dupont in Seaford after 38 years of service and still attended the many breakfast and social meetings of the local Duponters. After retirement he worked for 10 years for Kitty’s Flowers in Salisbury, a job he truly loved. He was a long time member of Mt. Vernon United Methodist Church in Sharptown, the Sharptown American Legion, Post 218, Seaford Elks for 49 years and served the town of Sharptown for 51 years with the Sharptown Volunteer Fire Department, where he held several offices and positions. He will be remembered as a loving family man who served his community unselfishly for so many years in so many ways. He is survived by his wife of almost 52 years, Edna Baker Griffith; a daughter, Teresa Herring of Sharptown; a son, Greg Griffith of Morganton, NC; grandchildren, Travis Griffith (Rachel) and Lucas Grant Herring; a great granddaughter, Addison; 3 step grandchildren; 7 step great grandchildren; brothers, Howard Griffith (Judy) of Laurel and Robert Griffith (Ruth) of Seaford; and a half-brother, Ricky Robinson (Faith) of Seaford. He is also survived by several nieces and nephews, and his beloved dog, “Chloe.” A visitation for family and friends will be held on Wednesday, April 25, 2018 from 6:00 p.m. to 8:00 p.m. at the Sharptown Volunteer Fire Department Memorial Building, where a funeral service will be held on Thursday at 2:00 p.m. The Reverends David Bennett and Robert Miller will officiate. Interment will follow in Sharptown Fireman’s Cemetery. Arrangements are in the care of Short Funeral Home in Delmar. Online condolences may be sent to the family by visiting www.shortfh.com.

The family of Richard Howard Griffith created this Life Tributes page to make it easy to share your memories.

Send flowers to the Griffith family.