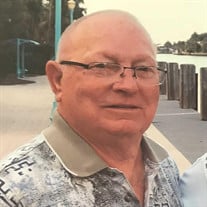 SEAFORD- Richard E. Blevins, 82, of Seaford, formerly of Baltimore, died Sunday, February 4, 2018 at Atlantic General Hospital, while spending time in Ocean City attending an Alcoholics Anonymous convention. Richard was born September 17, 1935 in Pageton, West Virginia, a son of the late Carl and Hazel (Haskett) Blevins. At the age of 17 he married his teenage sweetheart, the former Barbara Regina Mills, with whom he recently celebrated 65 years of marriage. “Beaver,” as he was fondly known to co-workers, retired as a foreman from General Motors in Baltimore after many years of service. After retirement he worked several years as an addictions counselor at the Shoemaker House in Sykesville, a job that gave him a sense of satisfaction and gratification. He recently celebrated 42 years of sobriety, an accomplishment he was extremely proud of. As a former alcoholic, Richard made it his life’s work to help struggling alcoholics and addicts and saved many lives in the process. He was a long time, faithful fan of the Baltimore Orioles and Ravens. He will be remembered as a wonderful and loving husband, father, grandfather, great grandfather, brother and friend to many. When not working to help others, he could be found at the little league fields or high school sports fields supporting his children, grandchildren and great grandchildren. He is survived by his wife of 65 years, Barbara Mills Blevins; a daughter, Cindy Grachik (Ed) of Seaford; a son, Richard E. Blevins, Jr. (Jill) of Hanover, Pennsylvania; grandchildren, who lovingly called him “Paw,” Michael Grachik (Kristie), Kerri Grachik, Ryan Blevins (Krista) and Brandon Blevins (Jasmina); great grandchildren, Sierra, Hunter and Kolby Grachik and Dexter Blevins; and a brother, Jack Blevins. He is also survived by several nieces and nephews. In addition to his parents, he was preceded in death by brothers David and Charles Blevins; and sisters, Katherine Evans, Juanita Neal and Jane Niece. A memorial service will be held on Saturday, February 10, 2018 at 1:00 p.m. at Short Funeral Home in Delmar, where a visitation will be held from 12:00 to 1:00. Pastor Scott Sager will officiate. Memorial contributions may be made in Mr. Blevins’ memory to the American Heart Association by visiting https://donatenow.heart.org or the American Diabetes Association by visiting https://donations.diabetes.org. Arrangements are in the care of Short Funeral Home of Delmar. Online condolences may be sent to the family by visiting www.shortfh.com.

The family of Richard E. Blevins created this Life Tributes page to make it easy to share your memories.

Send flowers to the Blevins family.