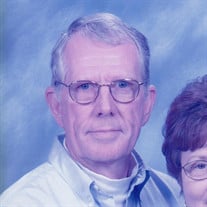 Ralph Estes Shockley, of Snow Hill passed away on Friday, January 22, 2021 at Atlantic General Hospital in Berlin. Born October 11, 1942 he was the son of Percy Franklin Shockley and Elizabeth of Indiantown. Ralph graduated from Snow Hill High School in 1960. After graduation, he went on to graduate from Goldey-Beacom Business School in Wilmington, Delaware. When he returned to Snow Hill, Mr. Marion Brown owner of Booth and Brown Insurance offered him a job. Mr. Brown died 6 months later and his widow Mary took over the business. Upon Mrs. Brown’s retirement, Ralph bought the Booth and Brown business. He then formed a partnership with Dave Wheaton, of Jones and Wheaton Insurance. The two men merged their individual businesses to become Associated Insurance Center. The business was honored in 2001 as Outstanding Business of the Year. At which time, it was honored by the Worcester County Commissioners with a Commendation as well as a banquet at the Snow Hill Lions Club. Ralph took great pride and dedication in making sure that his clients felt safe and secure. He made sure he spent all the time they needed to have their questions answered. He served the insurance industry for over 40 years. He retired January 1, 1999. Upon his retirement, he was awarded a commendation by Worcester County for his outstanding service to the community. As a teenager in 1959 and 1960 he worked at Frontier Town in Ocean City, as part of the original cast of cowboys. He spent those summers living the outlaw life entertaining visitors to the newly opened theme park. Later both of his granddaughters worked at the park as can-can girls. He loved to visit the park while they worked and reminisce about the things they did “back in the day”. He would always show up dressed in his outlaw gear in case they needed any help. Ralph was a member of the United Stated Coast Guard Auxiliary, President of the Snow Hill Merchant Association, served on Furnace Town Board, Snow Hill Christian Nursey School Board. He was a member of Whatcoat United Methodist Church. He served on Worcester County Economic Development Committee, which he was recognized for his 10 years of volunteer service in April 2019. He was a member and 32nd degree Mason of the Sinepuxent Lodge Number 193, where he was recently awarded a 50 year service pin. He spent his retirement enjoying the interests of his grandchildren. He spent many hours at ballgames, traveling to dance recitals, driving to golf lessons, watching school sports and following go kart racing; cheering on his boy “Chubbs” Shockley 048. Ralph proudly wore Chubb’s Maxxis National Championship Ring that Logan had sized for and presented to his grandfather at the last Maxxis National Banquet. He took great pride in the accomplishment of all his grand kids. He looked forward the morning “business” breakfast meetings he held with his partners in crime. He never missed an opportunity to tell a good joke, share a story or present a special gift to his breakfast crew members. Ralph always said, “Never let the truth get in the way of telling a good story!” He is survived by his wife of 57 years Joyce Ingersoll Shockley; a daughter Beth Shockley-Lynch (Jere); a son Ralph “Chip” Estes Shockley Jr. (Shawna); five Grandchildren Kyle, Rachel and Blaire Lynch and Logan and Levi Shockley, all of Snow Hill; a brother David F. Shockley (Sandra); and several nieces and nephews. The family would like to sincerely thank the doctors and nurses in the intensive care unit of Atlantic General Hospital for all the special care and kindness they showed us during this very difficult time. Due to current gathering restrictions, the funeral service will be private. Services are in the care of Short Funeral Home in Delmar. Online condolences may be sent to the family by visiting www.shortfh.com.

The family of Ralph E. Shockley created this Life Tributes page to make it easy to share your memories.

Send flowers to the Shockley family.