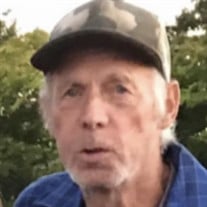 SALISBURY- Paul George Jones, 80, of Salisbury, died Saturday, October 9, 2021 at his home on Waller Road after a short illness. He was born February 8, 1941 in Hebron, a son of the late John Emory Jones and Olga Bertha Yerkie Jones. On August 20, 1960, he married Mary Louise Hurley and together they celebrated almost 58 years of marriage. Paul farmed most of his life and loved being outdoors and working the land. In his younger days, he worked as a mechanic for Green Giant for several years before joining the Salisbury Fire Department in 1975 and retired as assistant chief in 2001 after 26 years of service. He was also a lifelong member of the Hebron Fire Department. He enjoyed refinishing furniture and had a passion for woodworking. He will be remembered fondly as a true family man who would do anything for his wife, children and grandchildren. He is survived by children, William Douglas “Doug” Jones and his wife, Holly, James Lowell Jones and his wife, Glenda and Dwayne David “D.J.” Jones and his wife, Beverly; five grandchildren; several great-grandchildren; a sister, Sylvia Mozingo and husband, Bob; and several nieces and nephews. In addition to his parents, he was preceded in death by his wife, Mary Lousie (Hurley) Jones; siblings, June Disharoon, Jack Jones, Diane Lokey and Bob Jones. A graveside service will be held on Thursday, October 14, 2021 at 10:00 a.m. at Springhill Memory Gardens in Hebron. The family has requested casual attire. In lieu of flowers, memorial contributions may be made in his memory to Hebron Fire Department, P.O. Box 300, Hebron, MD 21830 or Salisbury Fire Department, Station 16, 325 Cypress St, Salisbury, MD 21801. Arrangements are in the care of Short Funeral Home in Delmar. Online condolences may be sent to the family by visiting www.shortfh.com.

SALISBURY- Paul George Jones, 80, of Salisbury, died Saturday, October 9, 2021 at his home on Waller Road after a short illness. He was born February 8, 1941 in Hebron, a son of the late John Emory Jones and Olga Bertha Yerkie Jones. On August... View Obituary & Service Information

The family of Paul G. Jones created this Life Tributes page to make it easy to share your memories.