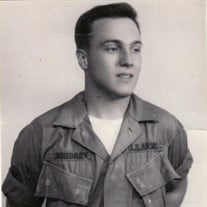 Orrin Dale Joudrey I, 73, passed away March 4, 2020, at his home in Fruitland, Maryland. Mr. Joudrey was born March 3, 1947 in Livermore Falls, ME. He was a U.S. Army Veteran having served two tours in the Vietnam War from 1967 to 1968 in the Qui Nhon 58th Field Depot. He is survived by his wife of 33 years Diane Madison Joudrey, 63, his daughter, April Dawn Joudrey, 42, her wife Kimberly, 35, his son Orrin Dale Joudrey II, 27, and his brother Alvin, 79. He was preceded in death by his mother, Levene Galen, his five brothers Tom, George, Roger, Harvey, and Stuart and his three sisters, Helen, Faye, and Wanda. Orrin had a love for life and many passions including Janis Joplin, the cultures of Asia, his fellow Veterans, and most of all, his family. Interment will be at the Eastern Shore Veterans Cemetery in Beulah Hurlock, MD. Online condolences may be sent to the family by visiting www.shortfh.com. Arrangements are in the care of Short Funeral Home in Delmar.

The family of Orrin Dale Joudrey I created this Life Tributes page to make it easy to share your memories.

Send flowers to the Joudrey family.