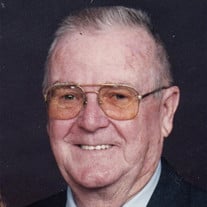 SEAFORD- Norman James LeCates, 93, of Seaford, and formerly of Laurel, was called home to Heaven to be with his Lord and Savior on Monday, February 12, 2018 at Methodist Manor House in Seaford, where he had resided the past few years. He was born December 18, 1924 in Laurel a son of the late Oscar J. and Minnie Florence (Niblett) LeCates. Norman grew up on the family farm and at a young age left school to help on the farm after the unexpected passing of his father. He farmed almost his whole life and dreamt of owning his own farm one day. After retirement his farming continued, but only on a smaller scale. He had a green thumb and could grow the best tomatoes and other vegetables. On July 4, 1945 he married his high school sweetheart, Mary Lee Wagner, and shortly thereafter, his dreams of owning his own farm came true, as they bought a farm and raised a family. He was a long time member of King’s United Methodist Church in Laurel where he sang in the King’s Church Quartet. He was an avid sports fan and enjoyed playing for the King’s church league softball team and bowling in the Laurel Men’s Bowling League. Fishing and family camping trips to Assateague, Chincoteague and their summer home in Crisfield were always fun for the whole family. Norman and his wife also enjoyed spending many winters in Florida. He will be remembered as a kind hearted man with a great sense of humor and someone who always put others needs before his own. He is survived by his wife of 72 years, Mary Lee (Wagner) LeCates; daughter, Shirley Figgs; son, Jim LeCates and wife, Fran; and daughter, Diane Brubaker, all of Laurel; grandchildren, Troy Travatello, Timmy Travatello, Teresa Travatello, Jamie LeCates and his wife, Jenn, and Tara Lynch Banks and her husband, Jeffrey; great grandchildren, Alex, Benjamin, Josh, Daniel and Caroline; and sisters, Arvalene E. Moore of Laurel and Mildred R. Hitchens of Delmar. He is also survived by several nieces and nephews. In addition to his parents, he was preceded in death by a brother, Harvey Lee LeCates; and a son-in-law, William Dale Brubaker. A funeral service will be held on Sunday, February 18, 2018 at 2:00 p.m. at Short Funeral Home in Delmar, where a visitation will be held from 1:00 to 2:00. Pastor John Rogers will officiate. Interment will be private. In lieu of flowers, memorial contributions may be sent to King’s United Methodist Church, c/o Mrs. Karen Perry, 34591 Gordy Road, Laurel, DE 19956. Arrangements are in the care of Short Funeral Home of Delmar. Online condolences may be sent to the family by visiting www.shortfh.com.

SEAFORD- Norman James LeCates, 93, of Seaford, and formerly of Laurel, was called home to Heaven to be with his Lord and Savior on Monday, February 12, 2018 at Methodist Manor House in Seaford, where he had resided the past few years. He was... View Obituary & Service Information

The family of Norman James LeCates created this Life Tributes page to make it easy to share your memories.

SEAFORD- Norman James LeCates, 93, of Seaford, and formerly of...

Send flowers to the LeCates family.