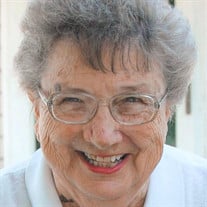 Nora Smith Williams was born on April 20, 1928, to Edward Smith and Hilda McIntyre Hearne of Mt. Vernon, Maryland. After a very fulfilling life of work, love, and service, she finished her work on the earth on Friday, May 24, 2019, supported by her family and friends who have loved and adored her throughout her life. She is survived by a posterity that will cherish the wonderful memories and the great abundance of love that she consistently poured out on all—sister, Nerine Clift; sons, Robert Woodland Long (Woody) and wife, Lynda; James Bruce Williams and wife, Kris, and Roland H. Williams; grandchildren, Shane Long, (Tammy), Jamie Nopper (Jeff), Nate Williams (Melanie), Steffan Williams (Caryn), and Torrie Ellis (Cassidy); great grandchildren, Lily, Arianna, and Tess Nopper, Scarlett, Autumn, Holland, and James Soren Williams, Greyson, Kaden, Vea, and Jayne Williams, and Parker, Riley, Gavin, and Lincoln Ellis; nieces, Laurie Calland, Heather Kamimoto, Linda Gail Boyer, Pam Smith, Susan Habermeier, Louise Wetherill, and Genie Chatas; nephews, Gary Clift, Ray Long, Danny Williams, Gary Williams, and Ellis Hammond; and numerous grand nieces, nephews, and cousins that were dear and precious to her. In her lifetime she had a host of friends and gathered in many other children who were like grandchildren to her as she loved and influenced them. Among the many “adopted” families were Sam and Barbara Sollars and their nine children and families. Carole Pinchak was another beloved “adopted” daughter. Her great influence spread to many youth and adults in the Church of Jesus Christ of Latter Day Saints as she served in the women’s organization as President, the young women’s auxiliary as a counselor, and in the Primary, the children’s organization, as a counselor. She worked her way into everyone’s heart through her love, compassion, and service. When her husband, James (Jimmy) served as Bishop, she truly became the Mother of the ward, teaching, counseling, and helping many of the members of the congregation. She was well known for her baking abilities- her chocolate chip cookies brought in over $25 a bag at Church fundraising auctions; her hot biscuits, sour cream pound cake, chicken salad, chocolate frosted vanilla cupcakes, and many other favorites were a welcome sight at any potluck. In life Nora was a true sports fan and excelled at Washington High School where she was named “girls’ athlete of the year” her senior year. Her early school and high school love of field ball, softball, and basketball in Princess Anne carried on into her adult years during which she enjoyed following many college and professional teams. She was an outstanding bowler and won many trophies and prizes-- one award for having a 567 for a 3-game series and another one for a game of 267. She was one of the main fans for her grandchildren’s golf and tennis tournaments, baseball, softball, soccer, football, volleyball, field hockey, lacrosse, and basketball games, and track events. She was proceeded in death by her parents and her husband, James C. Williams, as well as many special brothers-in-law, sisters-in-law, and cousins. A funeral service, officiated by Bishop Tyler Peterson, will be held at 1:00 p.m. on Friday at The Church of Jesus Christ of Latter-Day Saints at 106 Greenlawn Lane in Salisbury. Friends may visit with the family from 12:00-12:45 p.m. Interment will be in Wicomico Memorial Park. In lieu of flowers, donations may be made to The American Diabetes Association or to the charity of your choice. Funeral arrangements are being handled by the Short Funeral Home in Delmar, DE. Online condolences may be sent to the family by visiting www.shortfh.com.

Nora Smith Williams was born on April 20, 1928, to Edward Smith and Hilda McIntyre Hearne of Mt. Vernon, Maryland. After a very fulfilling life of work, love, and service, she finished her work on the earth on Friday, May 24, 2019, supported... View Obituary & Service Information

The family of Nora Smith Williams created this Life Tributes page to make it easy to share your memories.

Send flowers to the Williams family.