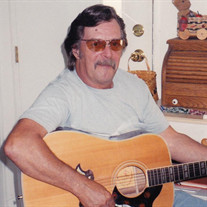 DELMAR- Nathan D. (Bunky) Truitt, 70, passed away on Wednesday, October 4, 2017, at Peninsula Regional Medical Center surrounded by his loving family. He was born in Delmar, a son of the late William and Laura (Kennerly) Truitt. Bunky proudly served his country in the U.S. Army in the late 60’s. Through his lifetime he worked several places, and for the past 10 years worked in security for Credit Plus in Salisbury.Bunky’s true passion was music. His most recent band was called “The Revelation Band.” He could pick up a guitar wherever he was and instantly make lots of friends. He was a long-time George Jones fan and truly enjoyed singing his songs. He will be remembered as a wonderful, loving husband, father and grandfather. He is survived by his wife and best friend, Patricia “Patty”, to whom he married December 17, 1999; his daughters, Melissa Meadows (Cameron); Jennifer Palmer (Troy) and TSgt Angela Layton, stationed at Langley Air Force Base; granddaughters, Brook Bishop, Lori Meadows and Izzy Wilkerson; a grandson, Robert Elliott (Tommi) and family of Salisbury; and a special nephew, Bill Truitt, of Mardela Springs, Maryland. Bunky is also survived by a brother, William Truitt (LouAnn), of Rhodesdale, Maryland; a sister, Patricia Hammond, of Salisbury; a sister-in-law, Linda Truitt, also of Salisbury; a special friend who was like a brother, Joe White, of Salisbury; many nieces and nephews across the states; and last, but not least, his beloved beagle, “Susie.” Bunky was preceded in death by his brothers, Wayne Truitt (Gloria) and Richard Truitt; and a sister, Shirley Schirling. A visitation for family and friends will be held on Monday, October 9, 2017 from 1:00 p.m. to 2:00 p.m. at Short Funeral Home in Delmar, followed by a funeral service which begins at 2:00 p.m. In lieu of flowers, memorial contributions may be made in his memory to the American Lung Association, 1021 Gilpin Avenue, Wilmington, DE 19806 or the American Diabetes Foundation, P.O. Box 11454, Alexandria, VA 22312. Arrangements are in the care of Short Funeral Home in Delmar. Online condolences may be sent to the family by visiting www.shortfh.com.

The family of Nathan "Bunky" D. Truitt created this Life Tributes page to make it easy to share your memories.