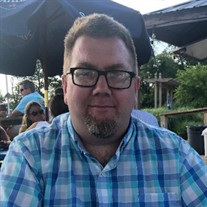 Norman Robert “Rob” West, 45, of Delmar passed away Monday, August 23, 2021, after a brief illness at Tidal Health Peninsula Regional Hospital. He was surrounded by his family when he went to be with the Lord. Rob, or Bobby, as he was known growing up, was born on October 22, 1975, in Toronto, Ontario Canada. He is the son of Harry Edwin Norman West and Barbara Jane (Reinert) West of Maryville, TN. In his youth, Rob enjoyed playing soccer, hanging out with friends, and always looking for ways to help others. He loved his family and was always protective over his younger siblings. He would do anything for his friends and family. Rob earned his master’s degree in counseling and divinity from Bethany Bible College in New Brunswick, Canada. He then moved to Superior, Wisconsin where he was an associate pastor. While Rob’s focus was on the youth community, he was able to help a lot of people throughout the community. By the time he moved on he had created a successful youth center with the help of other local churches. After living in several different states, he moved back to Delmarva where he set down roots. For the last 10 years he’s been working at Verizon where he’s a customer service representative. Rob was able to take the toughest calls and troubleshoot any problem. He had a gift for problem solving at work. He was part of the Local CWA and a part of their EBoard. Rob lived in several states throughout his life, but his heart brought him back to the Eastern Shore. He always enjoyed getting in his truck and going for a drive. He loved to go to TN and visit his parents. He loved his family and loved spending time with his “girls” (Wife Dawn and Step-daughter Jade). He would do anything for his girls. He also had a favorite niece, Sophie, that he spoiled when he spent time with her. He enjoyed cooking for his family and experimenting with new things. He loved his grill and smoker and was known by his friends for his smoked meat. He loved music; it was a vital part of his life. No matter what he was doing, whether outside in the garage or in his truck he was always listening to music. Rob was also known for his amazing singing voice. He began singing at the age of 4 and never stopped. From singing in his sandbox to singing at his church, Rob’s voice was enjoyed by many. Rob loved animals as was evident by the love he gave all his animals. He had 3 dogs, 3 cats, but we won’t mention the number of chickens and ducks that he was in denial about owning. His dog “Charlie” was his favorite out of all of them. He is survived by his loving wife, Dawn Marie (Meding) West; stepdaughter Jade Marie Lowe of Delmar; brother Michael David West and wife Judith West of Laurel, DE; sister Brittany West and niece Sophie West of Lebanon, CT; great aunt Joann Cliver; his in-laws Walter and Marie Meding of Lewes, DE; sister-in-law Kelly Meding of Delmar, MD, and a special aunt Linda Sturgis. He is also survived by many aunts, uncles and cousins on both sides of the family. Rob has many loves in life. His servant’s heart led him to serve at his church, 3CUSA in many capacities. He was willing to help wherever he was needed. As Rob conquered areas in his own life, he used those experiences to help others. He spoke at his church’s last men’s encounter and was able to touch many lives with his testimony. He’s made many lasting relationships and conquered many areas in his life with the help of his spiritual leaders. Thank you, Pastor Mike Rittenhouse for showing him the unconditional love and support that he needed when he first came to 3CUSA. Rob loved Jesus and knew that one day he would go to be with his Lord. A visitation for family and friends will be held on Thursday August 26, 2021, from 5:00pm to 7:00p, at 3CUSA church in Delmar, DE followed by a Celebration of Life at 7:00pm. Pastor Mike Rittenhouse will officiate. Memorial contributions can be made in his memory to 3C-USA Church, 38238 Old Stage Road, Delmar, DE 19940. Arrangements are in the care of Short Funeral Home in Delmar. Online condolences may be sent to the family by visiting www.shortfh.com.

Norman Robert &#8220;Rob&#8221; West, 45, of Delmar passed away Monday, August 23, 2021, after a brief illness at Tidal Health Peninsula Regional Hospital. He was surrounded by his family when he went to be with the Lord. Rob, or Bobby, as... View Obituary & Service Information

The family of N. Robert West created this Life Tributes page to make it easy to share your memories.

Send flowers to the West family.