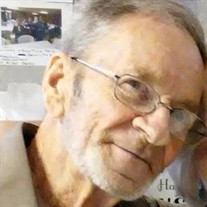 SNOW HILL- Norris Thomas “Tommy” Fitzsimmons, age 74, of Snow Hill, MD died Saturday, July 8, 2017 at Hartley Hall Nursing Home of Pocomoke City, MD. He was born June 4, 1943 in Salisbury, MD. He is the son of the late Ernest Thomas Fitzsimmons and Nellie Virginia (Layfield) Fitzsimmons. He married Yvonna Jean Sturgis Fitzsimmons on January 21, 1983. Tommy proudly served in the U.S. Navy for 4 years. In his younger days he drove a truck for Exxon before working at Cody's ESSO in Snow Hill as a skilled and talented auto mechanic for many years. In more recent years Tommy worked as a Bailer for Moore Business Forms in Snow Hill until he became disabled. He was a long time member of Spence Baptist Church in Snow Hill, where he served in several capacities such as trustee, Sunday school teacher and Deacon. He enjoyed the outdoors and could often be found happily cutting his grass and working in his yard and was an avid Washington Nationals fan. In addition to his church, Tommy’s passion was his family and he enjoyed making memories with his wife, children and grandchildren. He is survived by his wife: Yvonna Jean (Sturgis) Fitzsimmons; children, Jonathan Thomas Fitzsimmons (Emily Elizabeth) of Salisbury, Deborah Muir (Kevin) of Stockton, J.C. Fitzsimmons of Willards, Doug Jarman (Tammy) of Salisbury, and Marshall Fitzsimmons (Ginny) of Laurel; grandchildren, Faryn Muir, Myranda Muir, Ryan Jarman, Carly Muir, Francis “Bo” Jarman, Emmalee Jarman, Cori Fitzsimmons, Shane Fitzsimmons, Quinn Fitzsimmons, Amelia Jean Fitzsimmons and Riley Jarman; a sister, Loretta Hill and her husband, Richard of Westminster; and several nieces and nephews. He is also survived by a son-in-law, Van Muir; and a daughter-in-law, Tammy Fitzsimmons. In addition to his parents, he was preceded in death by a grandson, Marshall William Fitzsimmons, Jr; and several brothers and sisters. A funeral service with military honors will be held on Wednesday, July 12, 2017 at 2:00 p.m. at Spence Baptist Church in Snow Hill, where family and friends may call one hour prior to the service. Tommy requested casual attire for the services. The Reverend Kenneth Elligson will officiate. Interment will be private. Memorial contributions may be made in Tommy’s memory to Spence Baptist Church, 4824 Paw Paw Creek Road, Snow Hill, Maryland 21863. Arrangements are in the care of Short Funeral Home in Delmar. Online condolences may be sent to the family by visiting www.shortfh.com.

The family of N. Thomas "Tommy" Fitzsimmons created this Life Tributes page to make it easy to share your memories.

Send flowers to the Fitzsimmons family.