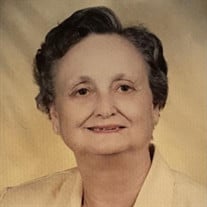 Miriam Wright Carey, 90, of Delmar, MD and of Fort Myers, Florida, peacefully passed away on July 15, 2021 at her home in Delmar, MD. She was preceded in death by her husband, Robert Lee Carey. She was born on March 16, 1931 and was happy to be able to celebrate her 90th birthday. Born Miriam Nancy Wright in Hebron, MD to Warner Mitchell Wright and Katie Holiday Wright. In addition to her parents, she was preceded in death by her 7 brothers and sisters, Wallace Wright, W. Lee Wright, John Wright, Nora Bennett, Mamie Bradley, Anna Wright, and Agnes Mathey. Miriam was a graduate of Delmar High School and earned her Home Economics Degree from Penn Hall. She was a homemaker and seamstress for most of her years. She also taught home economics classes and worked later in life at Nite Bright Signs in Fort Myers, Florida. Ms. Carey was involved in many organizations over the years including 4-H and the Laurel Grange. She was a member of the Southwest Florida Baptist Church and a member of the Embroiderers Guild of America, Sea Grape Chapter of Fort Myers, FL. She served as the president and vice president of the EGA for several years and won numerous awards for her seamstress work, quilt making, and needlepoint. Miriam is survived by her children Mamie (John) Hastings, Nancy (Neil) Parkhurst, Robert Carey, and Ruth (Greg) Mariner. She leaves behind 5 grandsons, John Hastings, James Hastings, Lee Parkhurst, Stephen Mariner, and Adam Mariner and 4 granddaughters, Jeannie Dunn, April Ferrell, Tiffani Carey, and Crystal Carey. She also leaves behind 19 great-grandchildren, Montana, Mathew, Mitchell, Nicholas, Carter, Lillian, Camden, Tonya, Katie, Kaia, Shelby, Bethany, Cole, Shane, Joseph, Lucas, Adriana, Jayce, and another little boy expected soon. A graveside service will be held at 11 a.m. on Tuesday, July 20, 2021 at St. Stephen’s Cemetery in Delmar, DE with Pastor Hamilton officiating. Arrangements are in the care of Short Funeral Home in Delmar.

Miriam Wright Carey, 90, of Delmar, MD and of Fort Myers, Florida, peacefully passed away on July 15, 2021 at her home in Delmar, MD. She was preceded in death by her husband, Robert Lee Carey. She was born on March 16, 1931 and was happy to... View Obituary & Service Information

The family of Miriam Wright Carey created this Life Tributes page to make it easy to share your memories.

Send flowers to the Carey family.