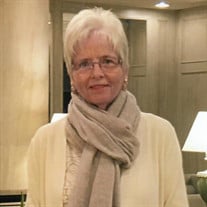 SALISBURY – Mary Majorie “Margie” Tingle died August 7, 2019, at home surrounded by her family. Born in Delmar, she was the daughter of the late Edward Michael Maloney and Eileen McSweeney Maloney. She graduated from Delmar High School in 1970 and earned her Associate’s Degree in Business Management in 1996. She and her late husband, Donald Richard Tingle, Sr., owned and operated Delmarva Tele-Plus, a communications company until their retirement in 2002. After retirement, they spent their winters in Marathon, Florida, where they enjoyed boating, fishing and the many friends they made who they considered their Florida family. Margie was an active member of St. Francis de Sales Catholic Church where she was on the carnival committee for many years and served in several other capacities over the decades. She loved adventure and travel and enjoyed trips to Europe, especially her trip to Paris with her grandson, Mack Moyer. She also spent a lot of time in St. Martin over the years with her husband and brother- and sister-in-law. Margie loved her family and helping others more than anything in life. She cherished all the time spent with the grandchildren over the years. She is survived by her children, Kevin (Kate) Ward, Donald (Debbie) Tingle, Jr., Julie (Jerry) Moyer, Lisa Vilkas, Scot (Allison) Tingle and William Tingle, Sr.; 16 grandchildren, PVT. Dylan Ward, Connor Ward, Abigail Ward, Brielle Ward, Lindsay (Lance) Lloyd, Matt Tingle, Somer (Bryan) John, Jerry Mack Moyer, III, David (Michelle) Moyer, Susie Avalos, Kristen Wiegant, Christopher Vilkas, Nicholas Vilkas, William (Amanda) Tingle, Jr., Alex Tingle and Brad Tingle; and 12 great grandchildren. Also surviving are her brothers, Gregory (Donna) Maloney, Sean (Melanie) Maloney, T.J. (Lana) Maloney, with whom she lived and Lex (Sherry) Maloney; sisters-in-law, Diane Maloney and Jean Maloney; brother-in-law, Robert Todd; and cousins Chris Maloney and Tuck McSweeney whom she considered brothers, and special friend, Michael Day and many nieces, nephews and cousins. Beside her parents, she was preceded in death by her husband of 36 years, Donald R. Tingle, Sr. and brothers, Brian and Kevin Maloney. Margie would like to thank all her family and friends for their love, prayers and support throughout her long battle with cholangio carcinoma (bile duct cancer). Thanks also for the great care by her doctor, Matthew Weiss, formerly of Johns Hopkins Hospital and the staff of Marbury 3 for their care and support over the last several years. Also a special thanks to TJ and Lana Maloney for opening their home to take care of her. Thanks also to Stacie Manbad with Peninsula Home Health for her excellent care over the past several years. A special thanks to Rochelle Corbin at Coastal Hospice for taking such wonderful care of Margie in her last weeks. A Mass of Christian Burial will be held on Wednesday, August 14, 2019, at 1:00 p.m. at St. Francis de Sales Catholic Church in Salisbury, with visitation Tuesday evening from 6:00 to 8:00 p.m. at the Short Funeral Home in Delmar, Delaware. Interment will follow services at Springhill Memory Gardens in Hebron. In lieu of flowers, donations may be made in her memory to Northwell Health Foundation, Dr. Matthew Weiss Research, 200 Marcus Avenue, New Hyde Park, NY 10042 or to The Joseph House, P.O. Box 1755, Salisbury, MD 21802. Arrangements are in the care of Short Funeral Home in Delmar. Online condolences may be sent to the family by visiting www.shortfh.com.

SALISBURY &#8211; Mary Majorie &#8220;Margie&#8221; Tingle died August 7, 2019, at home surrounded by her family. Born in Delmar, she was the daughter of the late Edward Michael Maloney and Eileen McSweeney Maloney. She graduated from Delmar... View Obituary & Service Information

The family of Mary Marjorie Tingle created this Life Tributes page to make it easy to share your memories.

Send flowers to the Tingle family.