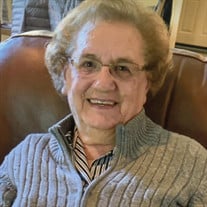 LAUREL- Mary M. Perdue, 94, of Laurel, passed away peacefully on Thursday, December 26, 2019 at Coastal Hospice at the Lake in Salisbury. She was born April 2, 1925 in Sioux Falls, South Dakota, a daughter of the late Paul and Anna D’Ercole. As a young girl Mary’s family moved to the Eastern Shore and she graduated from Pittsville High School. Mary worked as a meat cutter at the ACME in Salisbury and Laurel and retired after 23 years of service. For many years she served as the secretary for the Laurel Sportsman Beagle Club. Her truest love was cooking Sunday dinners, which usually consisted of homemade pastas and sauces from recipes of her Italian heritage. She loved hosting her family and friends and welcomed everyone with open arms. She will be remembered as a hard-working, strong-willed and loving wife, mother, grandmother, great grandmother, great-great grandmother, sister and friend to many. She is survived by a son, Vernon Perdue and wife Elaine; a daughter, Brenda Riley; grandchildren, Rick Smith, Bill Riley (Dawn), Randy Perdue and Brian Riley; great grandchildren, Nathan, Mitchell and Kendall Riley, MaKenzie Perdue, Ashleigh Gadbury and Storie Smith; great-great grandchildren, Shelbie and Evie; and several nieces and nephews. In addition to her parents, she was preceded in death by her beloved husband of 66 years, Vernon R. Perdue; a son, Richard Perdue; a grandson, Duane Perdue; a sister, Theresa Cannella and a brother, Egnzaio “Iggy” D’Ercole. A graveside service will be held on Monday, December 30, 2019 at 1:00 p.m. at St. Stephen’s Cemetery in Delmar, officiated by Pastor Linda Lane. Memorial contributions may be made in her memory to Coastal Hospice, P.O. Box 1733, Salisbury, MD 21802. Arrangements are in the care of Short Funeral Home in Delmar. Online condolences may be sent to the family by visiting www.shortfh.com.

LAUREL- Mary M. Perdue, 94, of Laurel, passed away peacefully on Thursday, December 26, 2019 at Coastal Hospice at the Lake in Salisbury. She was born April 2, 1925 in Sioux Falls, South Dakota, a daughter of the late Paul and Anna D&#8217;Ercole.... View Obituary & Service Information

The family of Mary M. Perdue created this Life Tributes page to make it easy to share your memories.

Send flowers to the Perdue family.