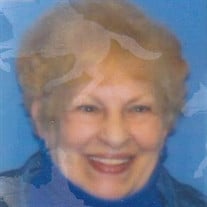 DELMAR- Mary D. Gibbons, 83, of Delmar, passed away Tuesday, September 5, 2017 at her home in Delmar. She was born February 6, 1934 in Laurel, the daughter of the late Herman E.Dulis and Minnie Thomas Dulis. Throughout her life she worked various jobs and had an excellent work ethic. Her employment included working as a seamstress at Laurel Manufacturing, then moved to Drug Fair, then she worked at Grumman in manufacturing. In her later years she worked at the Shore Stop in Laurel. When her health was good, she attended Emmanuel Wesleyan Church in Salisbury. She was a wonderful baker and enjoyed feeding family and friends. Her family will miss her corn pone, pizzelle, rum balls and other specialties. She was an avid New York Yankees fan, loved flowers, playing board games and bingo at the VFW with her family and had a special place in her heart for animals. She will be remembered as a devoted mother, grandmother, great grandmother, great-great grandmother and sister. She is survived by daughters, Patricia J. Moore and her husband, Kenneth, Sr. and Deborah L. Caputo and her companion, Jeffery Cormier; daughter-in-law, Teri M. Collins, all of Delmar; eight grandchildren; sixteen great grandchildren; and seven great-great grandchildren; a brother, John Dulis and his wife, Ann of Laurel; and a sister-in-law, Dorothy Dulis of Laurel. She is also survived by many nieces and nephews. In addition to her parents, she was preceded in death by two sons, Michael L. Collins and Ted W. Collins; former husband and father of her children, William O. Collins, who passed in 2010 and her second husband, Charles Gibbons, who passed in 1986; and two brothers, C. Angelo Dulis and Anthony Dulis. Graveside services will be private. Memorial contributions may be made in her memory to the Delaware SPCA, 22918 Dupont Blvd, Georgetown, Delaware, DE 19947. Arrangements are in the care of Short Funeral Home of Delmar. Online condolences may be sent to the family by visiting www.shortfh.com.

DELMAR- Mary D. Gibbons, 83, of Delmar, passed away Tuesday, September 5, 2017 at her home in Delmar. She was born February 6, 1934 in Laurel, the daughter of the late Herman E.Dulis and Minnie Thomas Dulis. Throughout her life she worked... View Obituary & Service Information

The family of Mary D. Gibbons created this Life Tributes page to make it easy to share your memories.

Send flowers to the Gibbons family.