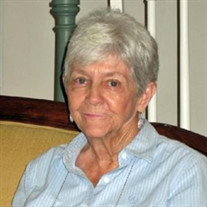 Margery “Marge” Wilson of Mardela Springs, Maryland passed away on Thursday, December 9, 2021 at Wicomico Nursing Home in Salisbury, Maryland. She was born on March 2, 1930 in Mardela Springs, a daughter of the late John Charles and Rhiney Mae Ryan Wagner. Marge was the youngest of six brothers and three sisters. When each of them passed, after coming from a large family, she felt so lonely because they were such a close and loving family. Also preceding her in passing was her husband, Robert Wilson, Jr.; and sons, Robert Wilson, III, and Michael Jay Wilson, Sr. She is survived by a grandson, Michael Jay Wilson, Jr. of Salisbury. Marge worked in downtown Salisbury for eighteen years in retail sales. Later she owned and operated Halfway House Antiques in Mardela Springs for twenty years. She enjoyed the business very much but even more she enjoyed the customers whom many became her friends. To her that was the most rewarding because she was truly a “people person.” She leaves several nieces and nephews whom she loved dearly and her many wonderful friends. They were all the best and very caring and helped to get her through the loss of her children and husband. A graveside service will be held at 1:00 p.m. on Friday, December 17, 2021 at Mardela Memorial Cemetery. Pastor Steve Wagner, her nephew, will officiate the service. In lieu of flowers, contributions may be made in her memory to the Mardela Springs Fire Department, P.O. Box 299, Mardela Springs, MD 21837 or to Coastal Hospice, P.O. Box 1733, Salisbury, MD 21802. Arrangements are in the care of Short Funeral Home in Delmar. Online condolences may be sent to the family by visiting www.shortfh.com.

Margery &#8220;Marge&#8221; Wilson of Mardela Springs, Maryland passed away on Thursday, December 9, 2021 at Wicomico Nursing Home in Salisbury, Maryland. She was born on March 2, 1930 in Mardela Springs, a daughter of the late John Charles... View Obituary & Service Information

The family of Margery E. Wagner Wilson created this Life Tributes page to make it easy to share your memories.

Send flowers to the Wilson family.