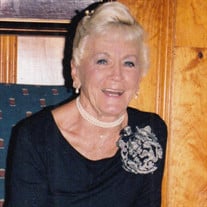 SHARPTOWN- Margaret Magers “Peg” Rider, 101 years old, died on Saturday, June 1, 2019 at her beloved home on the family farm. She was born in Hynson, Maryland on May 14, 1918, the daughter of the late William Clarence and Bertha Andrews Magers of Hurlock, Maryland. Her husband, Homer J. Rider died on February 24, 1994. She was also preceded in death by three sisters, Edna Louise Magers, Lorraine Magers Wheatley Rhodes and Martha Magers Warren Satterfield. Peg joined and attended the Methodist church in Hurlock, Maryland, where she taught Sunday school. She attended the First Baptist Church in Hurlock in her young adult years. She and her husband farmed the Margaret M. Rider Farm for over 60 years. The farm is a “Century Farm”, having been farmed for over 110 years by the same family, as designated by the State of Maryland. She was a graduate of Hurlock High School, class of 1935. Peg was a member of the Double Mills Homemakers Club, acting as secretary for many years, a member of the Eastern Shore Region Antique Auto Club and the National AACA for many years. She was also a charter member of the Westside Historical Society and helped with the restoration of the Barren Creek Presbyterian Church in Mardela Springs, a member of the Town and Country Garden Club of Salisbury for over 40 years and a member of the American Rose Society. Peg was an avid collector of vintage clothing ranging from 1865 to the present time. She modeled these clothes for local churches, and for Garden Club activities. She did fashion shows in the Hershey Hotel in Hershey, PA, and in shows in Philadelphia, PA, Hurlock, Sharptown, Laurel, Seaford at the Ross Mansion, Salisbury at Poplar Hill Mansion or wherever she was asked to. All clothing was worn and modeled by Peg herself. Peg and Homer had no children of their own but all children were always welcome to come and stay as long as they wished. Even after they had grown they still returned to visit, which pleased Peg tremendously. She is survived by Herman J. Fletcher, a lifetime friend of Peg and Homer and he operated the farm for many years, living with Peg and Homer for over 70 years. She is also survived by nieces, Maggie Ellis and Joan Wright; nieces and nephews on Herman’s side; and a host of friends. A visitation for family and friends will be held on Saturday, June 8, 2019 from 11:00 a.m. to 1:00 p.m. at Short Funeral Home in Delmar, followed by a funeral service which begins at 1:00. The Reverends Al Taylor and David Bennett will officiate. Interment will be held at Firemen’s Cemetery in Sharptown. Memorial contributions may be made in her memory to Coastal Hospice, P.O. Box 1733, Salisbury, MD 21802 or to the Westside Historical Society, P.O. Box 194, Mardela Springs, MD 21837. Arrangements are in the care of Short Funeral Home in Delmar. Online condolences may be sent to the family by visiting www.shortfh.com.

The family of Margaret Magers "Peg" Rider created this Life Tributes page to make it easy to share your memories.

Send flowers to the Rider family.