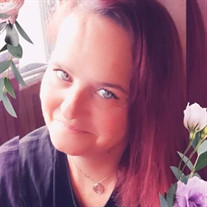 Mackenzie Dawn Truitt, 44, of Eden, passed away suddenly on Friday, September 3, 2021 at her home. She was born August 25, 1977 in Salisbury, a daughter of Carolyn M. (West) Ross and the late David Luffman. Mackenzie graduated from Delmar High School with the class of 1995. She worked the past several years as a front desk clerk at the Plim Plaza Hotel in Ocean City and considered her co-workers there like family to her. She had a special place in her heart for cats and dogs, and all animals in general. Kenzie loved to dance and loved all kinds of music, especially country and southern gospel music. She also enjoyed traveling, sight-seeing, everything Disney (she was a huge Lilo & Stitch fan), collecting stuffed animals and roller skating. She also loved football and was a lifelong Raiders fan. She had a wonderful creative side to her which led to her passion for crafting and diamond dot pieces. In her free time, she was an avid reader and a huge fan of Dean R. Koontz books. Most importantly, Kenzie was a loving wife, mother, grandmother, daughter, sister and friend to many. In addition to her mother Carolyn and her companion, Patrick Berlien, Kenzie is survived by her (mom-Mom) Virginia R. (Layfield) West; husband of 21 years, Melvin D. Truitt, Jr.; children, Kyle “Kylee” Elizabeth Truitt (Bret Blanchette) of N. Fort Myers, Florida and Jessie L. Truitt (Zowie Cable) of Eden; granddaughter, Peyton, who is “Mimi’s girl;” a brother, Troy Luffman of Westover and his daughters, Madison, Amanda, and Miranda and his son, Dakota "Cody;" a sister and brother-in-law, Dawn and J.P. Gunby and their daughter, Abigail (Abidoodle as Aunt Kenzie called her); and sister, Jessica Gibbs. She is also survived by nieces, nephews, great nieces and great nephews; brothers-in-law and several aunts, uncles and cousins and many friends. She was preceded in death by her (Daddy) David Luffman and her (Pop-Pop) Howard F. West. A memorial service will be held on Friday, September 17, 2021 at 2:00 p.m. at Short Funeral Home in Delmar, where family and friends may call from 1:00 to 2:00. Interment will follow at Melsons Cemetery in Delmar. In memory of Mackenzie contributions may be sent to a charity of your choice. Arrangements are in in the care of Short Funeral Home in Delmar. Online condolences may be sent to the family by visiting www.shortfh.com.

Mackenzie Dawn Truitt, 44, of Eden, passed away suddenly on Friday, September 3, 2021 at her home. She was born August 25, 1977 in Salisbury, a daughter of Carolyn M. (West) Ross and the late David Luffman. Mackenzie graduated from Delmar High... View Obituary & Service Information

The family of Mackenzie Dawn Truitt created this Life Tributes page to make it easy to share your memories.

Mackenzie Dawn Truitt, 44, of Eden, passed away suddenly on Friday,...